Cong Pham Back in Control in WPT Borgata Main Event

Day 1A Chip leader Cong Pham was back in control of the WPT Borgata Main Event after calling possibly the worst attempted bluff in live poker history. 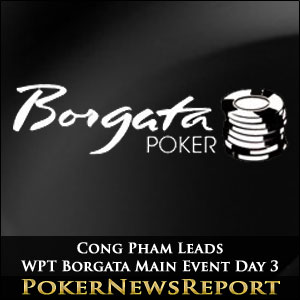 Day 1A Chip leader Cong Pham was back in control of the WPT Borgata Main Event after calling possibly the worst attempted bluff in live poker history.

Day 3 of the WPT Borgata Poker Open Main Event was an exceptionally drawn out day. Whereas the schedule had suggested that the day would end when the number of players was reduced to 27, tournament director Tab Duchateau decided to call a halt to proceedings just before 2.00am despite 36 players still being alive in the tournament.

Vanessa Selbst was drawn on one of the more fascinating tables of the early levels – against five times Borgata title winner Will Failla and the unlucky runner-up of the Heads-up Event #16 David Paredes. Neither Failla nor Paredes made it into the money as Selbst went on the rampage – busting Marc Marin K♣ K♦ > A♠ J♣, Jonathan Little 9♥ 9♠ > Q♥ 5♥, birthday girl Christina Lindley 2♠ 2♣ > A♥ K♥, Fernando Halac 10♣ 10♦ > 5♦ 2♦ and turning Quad Aces to cripple Adam Agaev.

However, other than Vanessa Selbst´s hot streak, the ladies had a bad day at the tables. Melissa Burr (101st), Ronit Chamani (70th), Christina Lindley (49th) and Ebony Kenney (41st) were the only other female poker players to make it into the money after Danielle Anderson, Cherish Andrew and Amanda Musumeci all bust out between the start of play and when the money bubble burst.

The bubble burst when Josh Levkov moved all-in on the board of J♦ 6♣ 5♥ / 4♦ with a set of Jacks. But Daniel Howe (7♦ 3♦) had turned a straight and had an easy call to make. Thereafter it all got a little bit crazy as fourteen players bust in the next 29 minutes, but the pace of eliminations slowed down considerably after dinner, so that at midnight (start of Level 22) forty-seven players remained and the decision was made to play down to thirty-six players or 2.00am – whichever came first.

As it transpired, Mark Rose (K♣ J♥) bust out in thirty-seventh place at two minutes before 2.00am after turning trip Kings but finding Jeremy Kottler (6♠ 6♣) with a full house of Sixes over Kings. Kottler´s K.O. and his pre-flop six-bet against Vanessa Selbst (above) enabled him to finish the day with 1,734,000 chips, and he will be one of the players to watch when play resumes for Day 4 of the WPT Borgata Poker Open Main Event.

When the remaining thirty-six players take their seats at noon on the Borgata Hotel and Casino there will be just about an hour left in Level 23 (blinds 8,000/16,000 – ante 2,000). Play is anticipated to continue until just a final table of six remain – but we shall see!