Negreanu has taken the runner-up spot in the SCOOP No-limit Draw event #6 (high) – but not before becoming confused as to which form of game he was playing! 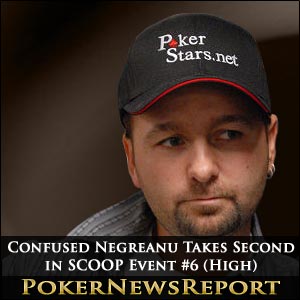 Canadian poker superstar Daniel ‘KidPoker’ Negreanu has taken the runner-up spot in the PokerStars Spring Championship of Online Poker (SCOOP) $1,050 buy-in No-Limit Draw event #6 (high) – but not before becoming confused as to which form of the game he was actually playing!

The 37-year-old took part in all three categories – high, medium and low – of this event, but did not realise he was actually playing five-card draw and not 2-7 single draw No-Limit Hold’em.

However, it was not long before Negreanu saw the light, quickly realising that he was attempting to play a different game from the other 83 entrants. He then returned to Twitter once more to write: Haha OMG I have been playing the wrong game this whole time! It’s 5 card draw HIGH oops! Too funny

‘KidPoker’ Just Misses Out on Success

Once certain how he should be playing, Negreanu – who fairly quickly crashed out of the medium and low versions of event #6 – made it all the way to the six-handed final table of the high stakes version to eventually pick up $15,330 after finishing as runner-up to Argentina’s ‘Maestro Shao’ following 90 minutes of heads-up play.

The final hand of their clash saw ‘Maestro Shao’ raise to 10,000, only for Negreanu to move all-in for his last 102,706 chips. ‘Maestro Shao’ called and ‘KidPoker’ drew three cards before his South American opponent drew two.

Meanwhile, French pro Bertrand ‘ElkY’ Grospellier couldn’t quite pick up his second SCOOP title – following his success in last year’s $25,500 buy-in No-Limit Hold’em Heads-Up event for $112,500 – as he crashed out in third place for $11,760 in the high buy-in tournament behind Negreanu and ‘Maestro Shao’.

American pro Scott ‘gunning4you’ Seiver was another well-known face to make a final table, this time in the $700 buy-in No-Limit Hold’em Heads-Up event #7 (high) – taking second place for $51,127.96 after losing his head-to-head with British player ‘shurgar’.

An impressive 793 players signed up for this tournament to ensure that the guaranteed prize pool of $125,000 was easily smashed as the top 128 players shared $531,310. That’s 425% above what PokerStars had guaranteed – and a sign of what has already been an incredible SCOOP. More on that later…

Britain’s ‘shurgar’ left with $80,350.76 from his clash with Ohio’s Seiver – a one-time WSOP champ – while there was also a host of other big-name pros who cashed in this exciting event, including Canada-based American Justin ‘ZeeJustin’ Bonomo in fifth for $14,239.10, and Englishman Chris ‘Moorman1’ Moorman and Team PokerStars Pro Victor Ramdin, who tied for ninth and $7,661.49.

2012 SCOOP On Course for Record Year

It does appear that this year’s SCOOP is on course to break all records and, of course, we at Poker News Report (PNR) will keep you updated on all the facts and figures as the online poker festival continues.