Irishman Thomas Finneran won the UKIPT Cork Main Event last night after admitting before the tournament´s climax that he was running well and feeling confident. 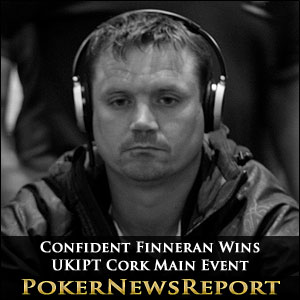 Irishman Thomas Finneran won the UKIPT Cork Main Event last night after admitting before the tournament´s climax that he was running well and feeling confident.

Irish eyes were smiling last night as Thomas Finneran captured the UKIPT Cork Main Event title after a day in which the tournament champion could have come from any one of four different countries. Finneran won his first major tournament after leading the event for most of the day, but entering the heads-up was at a chip disadvantage.

As players took their seats at the Rochestown Park Hotel for the climax to the UKIPT Cork, many believed the heads-up would ultimately concern the two players who had been tussling for the chip lead since Day 2 – Ireland´s Thomas Finneran and Poland´s Pawel Keller – but the day threw up a few surprises.

The Early Levels of the UKIPT Cork Finale

The early levels of the UKIPT Cork played out as onlookers believed they might. Within the 44 minutes remaining in Level 22 (blinds 8,000/16,000 – ante of 2,000) Nicholas Newport had been eliminated when running his 9♥ 9♦ into the A♥ A♠ of Thomas Finneran and, during the course of Level 23, Pascal Tongi was eliminated at the hands of Finneran (7♥ 5♦ > A♥ 5♥) and Alexander Rhys-Davies could not improved his A♣ 9♥ and was busted by Fridjon Thordarson (J♣ J♥).

Despite his two knockout blows, Thomas Finneran did not yet have overall control of the game. Pawel Keller had been involved in a ding-dong battle with Stephen McGrath and Deborah Worley-Roberts, and the Pole maintained his chip lead at the beginning of Level 24 when eliminating Worley-Roberts in a cooler of a hand. Shoving all her chips in with 10♠ 8♠ for two pairs on a board of 10♦ 3♥ 8♣ / J♣, Keller called and showed Q♦ 9♣ for a turned straight. With no help from the river, Worley-Roberts was eliminated in fifth.

Fridjon Thordarson had significantly improved his chances of winning the UKIPT Cork Main Event by doubling up against Pascal Tongi and busting out Alexander Rhys-Davies. Up to over 1 million chips, he was unlucky not to improve his position further when losing out in an A♣ 8♥ -v- Q♦ J♥ hand against Thomas Finneran after Finneran rivered a Jack.

Thordarson then lost a further portion of his stack when folding against a Stephen McGrath shove after a pre-flop raise and then shoved his last 392,000 chips with K♥ 2♥ only to run into Thomas Finneran (again!) who was holding K♦ 10♥. Finneran managed to avoid the flush draw and took the chip lead with a stack of 2,750,000 going into three-handed play.

Keller Next to Fall in Third

Three-handed play saw Stephen McGrath move up into contention. First he took a stack of chips from Pawel Keller when rivering a straight and the turned a flush to take chips from Thomas Finneran. Despite giving some back over the next few hands, McGrath was able to twice double up against Keller in A♦ 2♠ > Q♥ J♥ and A♠ Q♥ > A♣ 2♥ hands, and moved into second place in the chip counts when taking another 500,000 chips from Keller when his A♥ K♥ hit two pairs.

Keller´s departure from the tournament was also at the hands of Stephen McGrath. Keller (A♦ 7♦) moved all-in on a board of K♥ 5♦ 5♣ / J♦ and was called by McGrath (A♠ K♠). Keller missed his flush draw when the J♠ was dealt on the river and McGrath took the chip lead going into the heads-up against Thomas Finneran (3.05 million -v- 2.57 million).

Finneran Takes McGrath in Under an Hour

The balance of power swung back to Thomas Finneran in the first hand of the heads-up climax to the UKIPT Cork. Turning a straight, Finneran took down a 3 million chip pot against McGrath´s top pair and then followed that up by rivering another straight to reduce McGrath to just seven big blinds. One shove with pocket Aces gave McGrath temporary hope of a remarkable comeback, but it was all over in the very next hand.

Shoving pre-flop with 5♣ 6♣, McGrath was called by Finneran (Q♠ 8♠) and the two players watch the dealer turn 4♠ 8♣ 3♦ on the flop (putting Finneran in the lead but giving McGrath hopes of an open-ended straight draw) and then the 8♥ Q♣ on the turn and river to give Thomas Finneran a full house and the title of UKIPT Cork Main Event Champion.

Following a heads-up deal, the prizes for first and second were adjusted slightly. Thomas Finneran collected €55,440 for his victory, while the remainder of the final table pay-outs looked like this:-