New Jersey Gov. Christie conditionally vetoed the state’s online gambling bill, but the changes he proposed are minor and will allow the bill to become law. 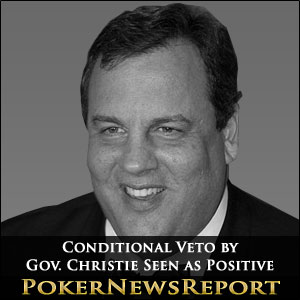 New Jersey Gov. Christie conditionally vetoed the state’s online gambling bill, but the changes he proposed are minor and will allow the bill to become law.

Waiting until the very last day to make his decision, Christie issued a 31-page conditional veto that details the changes required to be made in order for the governor to sign off on the legislation. The main conditions include a tax increase on online operators from 10% to 15%, additional funds earmarked for programs to combat addictive gambling, and limiting online gaming to an initial 10-year period that can be modified if it turns out to be beneficial for Atlantic City casinos.

Christie said in a statement that his decision will allow New Jersey to move forward by becoming one of the first states to permit Internet gaming. Nevada and Delaware have already enacted forms of online gambling legislation, which would make the Garden State the third state to do so. The bill will now go to state legislators who will vote on the proposed amendments. The bill’s sponsor, Sen. Ray Lesniak, expects no problems with the bill gaining approval with the Senate and Assembly and being back on Christie’s desk in a matter of weeks.

There had been speculation that if Christie did conditionally veto the bill, his proposal would call for only online poker to be offered by Atlantic City casinos. However, no such conditions were implemented and New Jersey will be hosting online casino games as well as online poker.

Atlantic City casinos are currently taxed 8% on revenue obtained from gamblers. The 15% tax that Christie requires for online gaming revenue will certainly cut into the profit margin of the casinos. However, some of the additional proceeds will go toward compulsive gambling programs, which was one of Christie’s major concerns.

Christie’s other main concern, that online gambling will keep people away from visiting the brick and mortar establishments, was addressed by putting a 10-year limit on the authorization of Internet gambling. If online gambling turns out not to be the savior of the struggling Atlantic City casinos that have seen six straight years of declining revenue, then the plug can be pulled at that time. However, Lesniak expects that provision of the bill to be removed well in advance of 2023.

Online gambling websites in New Jersey could be up and running by fall of this year. According to the legislation, online gaming cannot proceed until at least 90 days following Christie signing the bill into law, but must occur within six months. Assuming that the bill will eventually be signed sometime in March, online casino gamblers and poker players in New Jersey may be logging onto legal gaming websites in September.