From next Sunday, PokerStars will be hosting a series of “Common Cents” tournaments with micro-buy-ins starting at just $0.01. In addition to tens of thousands of dollars up for grabs, every player who plays in four or more events will have a chance of winning a Platinum Pass to the PokerStars Players Championship. 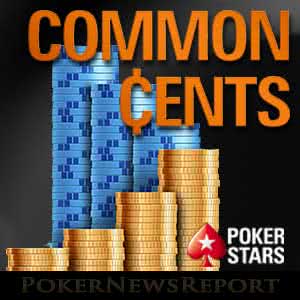 From next Sunday, PokerStars will be hosting a series of “Common Cents” tournaments with micro-buy-ins starting at just $0.01. In addition to tens of thousands of dollars up for grabs, every player who plays in four or more events will have a chance of winning a Platinum Pass to the PokerStars Players Championship.

Back in 2015, PokerStars broke the record for the online poker tournament with the largest number of participants, when 253,692 players entered the one cent buy-in Opening Event of the Common Cents series. Next Sunday, the site aims to beat its own record with a re-run of the event – the first of twenty-three micro buy-in tournaments guaranteeing more than $270,000 in prize money.

This time around there is an added incentive to play in the series – an opportunity to win a Platinum Pass to the PokerStars Players Championship (PSPC) in the Bahamas next January. Every player who plays in four or more tournaments during the Common Cents series will be entered into an All-In Shootout on Monday July 2nd, with the last man standing winning a Platinum Pass worth $30,000.

PokerStars´ Common Cents Series starts next Sunday and runs through to Sunday July 1st. Day 1 of the series consists of the one cent buy-in $100,000 guaranteed Opening Event (2:05pm ET) and a $0.22 buy-in NLHE Progressive Knockout Turbo with a guaranteed prize pool of $5,000 (4:05pm ET). Thereafter, the schedule for the week looks like this:

The Common Cents Main Event takes place on Sunday July 1st at 2:05pm ET. It has a buy-in of just $0.99 and a guaranteed prize pool of $25,000 – ensuring there will be tens of thousands of players shooting for a first prize in excess of $3,000. The buy-ins might be micro-sized, but the action isn´t likely to be!

All twenty-thee Common Cents events can be found in the PokerStars client by using the Find a Tournament search facility in the Tourney lobby. If you are playing from a mobile device, you can find the events via “More” menu. Remember, you only have to enter four events to qualify for the Platinum Pass All-In Shootout on Monday July 2nd.

What Else is Going On at PokerStars?

There is plenty else going on at PokerStars during the FIFA World Cup. Two weeks ago the site launched its Spin & Goal promotion, giving players the chance to win $1 million for free; and last week a second World Cup themed promotion got underway – “Flag Hunt”.

In the Flag Hunt promotion, flags representing the thirty-two teams playing in the World Cup are hidden within Reward Chests. Each time you open a Rewards Chest, a flag will be revealed in addition to the regular StarsCoin, cash and tournament entry tickets. The objective of the promotion is to complete a set of all thirty-two flags.

In order to make it easier for recreational players to get something from the promotion (which ends on July 15th), the promotion is broken down into three stages – 4 flags, 12 flags and 16 flags. Each time a stage is completed, a prize is awarded – the value of the prize subject to the level of Stars Reward chest (Red, Blue, Bronze, Silver, etc.) at the time the final flag to complete the stage is collected.

So, whether you have a preference for cash games, jackpot hyper-turbo Sit & Go games or multitable tournaments, there is something to please everybody over the next few weeks at PokerStars. Make sure you don´t miss out on the chance to be a record-breaker next Sunday by entering the one cent buy-in Opening Event, and then remember to enter at least three more Common Cents tournaments to be entered into the Platinum Pass All-In Shootout.