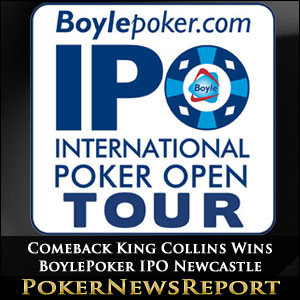 There was a rapid conclusion to the BoylePoker IPO at the Aspers Casino in Newcastle this weekend, as Aspers regular Dave Collins benefitted from a very swingy final table to break down his opponents and collect the £5,010 first prize.

An early conclusion to the event was partly due to a fairly modest entry into the £225.00 buy-in tournament; with just 124 entries received over the three opening flights – and some of those being re-entries who bust out on Day 1A or Day 1B.

49 players returned to Aspers on Sunday to compete for the IPO title, and the thirteen-player money bubble burst when Marc Foggin (Ace-Queen) rivered a Queen to eliminate James Lawson (Ace-King) in fourteenth place. A little over an hour later, the final table was set – headed by Michael Richardson, with Dave Collins languishing at the foot of the leaderboard with little more than five Big Blinds.

Paula Wilson had come into Day 2 as the overnight chip leader, but her participation at the final table was incredibly brief. The primary destroyer of her stack was Connie Jackson, who rivered a flush to crack Wilson´s Aces with a pair of Jacks, but Jackson could not repeat the trick with a pair of Sixes against Michael Richardson´s pocket Aces – enabling Richardson to be the first player over a million chips.

Hamid Rowshanari, David Knight and Paula Wilson all fell quickly, while Dave Collins managed a couple of double ups to chip up into contention. Marc Foggin then took over at the top of the chip counts when flopping a King-high straight to bust Connie Jackson, and he established a massive chip advantage with the eliminations of Hailong Xiao in sixth place (pocket Sixes > King-Ten) and Dan Patterson in fifth place (Ace-King > Ace-Ten).

Former chip leader Michael Richardson was bust in fourth place by Dave Collins, after which the three remaining players agreed to lock up £4,300 each and leave £1,410 for the winner of the event. The deal definitely affected the fortunes of Marc Foggin – who lost a massive pot against Darren Knaggs when Knaggs hit an Ace-high flush; and within two hands Foggin was bust in second place – his King-Deuce running into Dave Collins King-Queen and failing to find the required improvement.

Dave Collins took a 2.1 million -v- 1.6 million chip advantage into the heads-up against Darren Knaggs, and the two players each agreed to split the £1,410 put aside for the winner and just leave £10 and the title to play for. The heads-up lasted just fifteen minutes – Dave Collins completing the ultimate comeback when his A♥ 5♣ paired on the board to take the last of Darren Knaggs´ chips and claim the Newcastle BoylePoker IPO title.