The cashout structure for the record-breaking WSOP Colossus has got the poker industry discussing whether it was a missed PR opportunity or good for the game. 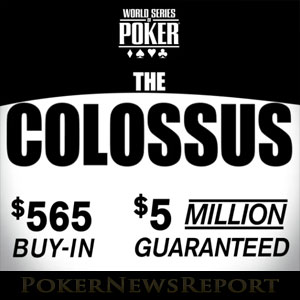 The cashout structure for the record-breaking WSOP Colossus has got the poker industry discussing whether it was a missed PR opportunity or good for the game.

Event #5 of the 2015 World Series of Poker will go down in the history books as the tournament with the biggest-ever number of entries. The $5 million guaranteed event saw 22,374 entries over the four opening flights of the $565 buy-in tournament – generating a prize pool of $11,187,000.

However, when the distribution of prizes was announced, gasps of shock rang around the Rio All-Suites Hotel and Casino, due to first place paying “only” $638,880. A flat cashout structure made the distribution of the prizes bottom heavy – sparking a massive debate on Twitter about whether the lack of a $1 million first prize (which many had expected) was a missed PR opportunity or good for the game.

Shock Amongst the Pro Players

After the announcement of the prize money distribution was made, several top professionals took to Twitter to express their opinion of the cashout structure:

Someone lost half the Colossus prizepool

Why is colossus first place only 638k? Lol is that a joke? Like 6% of prize pool? Now I’m really glad I skipped it… should be 1 mill easy

A number also compared the structure with the recent SCOOP Main Event on PokerStars,

Or criticised the first place prize money in relation to the rake WSOP was making from the event.

Ty Stewart Goes on the Defensive

In response to a significant volume of abuse toward the WSOP, Ty Stewart – the World Series of Poker´s Executive Director – went on Twitter to defend the organisation´s decision to pay a much flatter structure than expected.

Stewart said that the structure was justifiable because so many players had travelled to Vegas to play in the event – many buying-in more than once. He argued that the event was never meant to be a top heavy promotion for the benefits of PR and that he was happy that thousands of players would go home with a strong ROI for their efforts.

He said that he understood the “snap call sentiment” about the distribution of the WSOP Colossus prize money, but the decision was made so that the maximum number of players would make a profit in the event and feel more inclined to visit the WSOP again later in the series. Stewart added that there were plenty more events on the way which would satisfy players looking for a seven-figure payday.

There´s No Such Thing as Bad PR

Quite possibly the storm kicked up by the flat cashout structure of the WSOP Colossus has done the WSOP more good than harm. By introducing a structure that appeals to its weekend players, the WSOP may see a higher attendance in future feature events (the Millionaire Maker gets played next weekend).

Industry professionals have leapt to the defence of Ty Stewart and his colleagues. Alex Dreyfus, Aaron Todd and Nolan Dalla all expressed how the Colossus cashout consternation was a knee-jerk reaction to a radical move, and highlighted that the event had attracted more first-time visitors to the WSOP than any other event in its forty-six year history.

Certainly the social media bust-up over the cashout structure of the Colossus will have many recreational players feeling that they are considered by the events´ organisers – and what a stunning piece of PR it would be if one of the first-timers went on to win the event later today. Surely then the discussion about whether the Colossus cashout structure was a missed opportunity or good for the game would be immaterial!

Did you play in the WSOP Colossus? Did you cash in the event? What was your opinion of the cashout structure? Please let us know by leaving your comments in the box below.