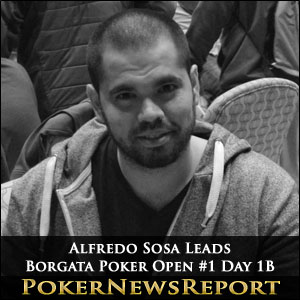 It was a very busy day at the Borgata Hotel Casino and Spa in Atlantic City yesterday as another sixteen levels of Event #1 were played in the second of four opening flights. With the total number of players now exceeding 1,000 – and with another two opening flights to be played today (Thursday) – organisers are confident of surpassing the $1 million guaranteed for this event by some way.

Chip leaders flip-flopped throughout the day – conscious that Day 1A chip leader Andrew Klein had amassed 366,000 chips – and, when the chips were bagged and tagged at the end of the night, Alfredo Sosa had got closest to Klein´s mighty stack, finishing with 355,000 chips with Taurean Davis close behind on 347,000 chips.

Who Organised These Seats?

With hundreds of players entering and re-entering, the luck of the draw can sometimes throw together some interesting table combinations. Players seated at the same table as two-times Borgata Poker Open winner Vinny Pahuja may not have been too happy about him having position on them, but Pahuja did not look too thrilled when five times Borgata Poker Open winner Will Failla came and sat next to him after Failla´s table broke.

Neither player made to through to the close of play on Day 1B and if they want to improve their Borgata Poker Open trophy haul in this tournament, will have to buy-in again on Thursday when Day 1c starts at 11.00am and Day 1D kicks off at 5.00pm with unlimited re-entries in both sessions only available until the end of Level 9.

Who Was That Then?

With the volume of famous faces and recreational players participating in the Borgata Poker Open, there were a few personalities who maybe did not receive the respect they deserved. Matt Beier was guilty of failing to recognise WPT Player of the Year (Season IX) and 2-time WSOP bracelet winner Andy Frankenberger when busting him out Kings > Nines – “I wasn’t sure who he is,” said Beier, “but I know I’ve played with him before.”

Perhaps a bigger faux pas was made by Frank Gagliarid, who had been sitting next to actor Robert Iler (Anthony Junior in the mafia series “The Sopranos”) for three levels. After Iler had been knocked out by Joana Leban (Ace-King > pocket Tens), Leban had to explain to Gagliarid who Iler was. I had no idea, said Gagliarid, He was a nice guy and told me ‘nice hand,’ a couple of times. Both Leban and Gagliarid survived Day 1B at the tables, but nobody knows if they made it home safely!

Looking Ahead to Day 1C and 1D

With two more starting flights today, more craziness is anticipated at the Borgata Hotel Casino and Spa. Those who will not have to worry about collecting a big stack of chips for Day 2 on Friday (because they have enough already) include: