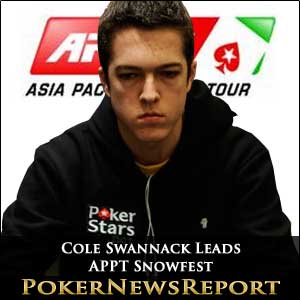 Just 40 players entered the NZ$3,000 buy-in event on the first of three Day 1s but, as with any competition where Aussies and Kiwis are across the table from each other, the action was far from quiet.

First Blood to the Kiwis

Three major hands saw Koray Turker storm into a commanding chip lead. First a pre-flop five-bet against Brett Chalhoub saw his 10♥ 9♥ best Chalhoub´s A♣ K♥ on a board which fell 10♠ 5♥ 3♠ / Q♦ / Q♠. He then found a wheel (A-5 straight) on the flop when holding 4♦ 2♥, and followed that up by cleaning out PokerStars sponsored John Maklouf with a backdoor flush which gave him over 100,000 chips – an eighth of all the chips in play.

A late slip in the day when risking J♦ 9♥ against Jacky Wang´s A♦ Q♣ saw Turker slip back and allow Cole Swannack to be overnight chip leader, but Turker, Swannack and Zheng take very healthy stacks into Friday´s Day 2 of the APPT Snowfest.

With a field dominated by players from New Zealand, it was inevitable that the majority of the 20 players who made it through to Day 2 would be home based, but maybe in not such commanding numbers as was anticipated. Only two Australians will feature among the top ten players when play resumes at the Skycity Casino in Queenstown.