Colburn ‘Rastafish’ Tomlin is sure to enjoy a fabulous Christmas after picking up £89,213 for winning the most recent Monte Carlo tournament at Nottingham’s Dusk Till Dawn. 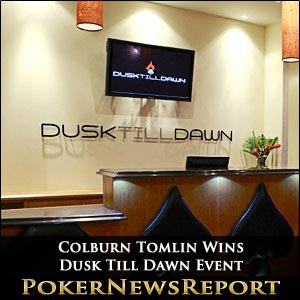 Colburn ‘Rastafish’ Tomlin is sure to enjoy a fabulous Christmas after picking up £89,213 for winning the most recent Monte Carlo tournament at Nottingham’s Dusk Till Dawn.

Local player Colburn Tomlin outlasted a 289-strong field in the first ever £1,090 buy-in event at DTD that included the likes of Julian Thew, who finished out of the money in 52nd place, Willie Tann (71st), Neil Channing (59th) and Jeff Kimber (44th).

The top 27 finishers were, however, assured of at least £1,500 in prize money, with Anthony Nicholls the unfortunate bubble boy in 28th place. His exit did, though, allow Todd Swain to collect £1,500 for his 27th place finish.

He also picked up £3,182 for another second place finish, this time in the £150 buy-in No-Limit Hold’em Monthly Deepstack back in October.

However, this latest victory is worth more than close to double all his previous cash finishes combined.

Triple Crown winner Jake Cody and Jerome Bradpiece, of London, were the best known players to make the final table of the £250,000 guaranteed prize pool event, although the latter’s stay was cut short when his kings came up against the aces of Paul Skipper.

Cody also exited earlier then he would have hoped in third spot, shortly after losing the majority of his chip stack when his A-Q encountered the pocket queens of Skipper in a 4,500,000 pre-flop pot.

Cody received no assistance on a board that read 3-10-4-7-4 – and that chopped the one-time World Series of Poker (WSOP) bracelet winner down to only three big blinds.

Rochdale star Cody – who won £115,054 for his runner-up finish at the Grosvenor UK Poker Tour (GUKPT) Grand Final £2,500 buy-in No-Limit Hold’em main event at The Vic in London recently – was soon out in third place for £31,293 when his 10-9 ran into Skipper’s Q-9 and a queen arrived on the flop to give the latter top pair.

Now down to a heads-up battle following the earlier exit of Alex Goulder in fourth spot for £21,960 and the elimination of Will Dorey in fifth for £16,470, Skipper held a 5,100,000 to 3,100,000 chip lead Tomlin and appeared certain to take the big prize when all-in with pocket kings against the A-2 of his opponent.

However, an incredible flop of 2-2-8 handed Tomlin a massive chip lead over Skipper – and the former sealed his victory not long after that pot when calling Skipper’s all-in shove.

Skipper showed K♣ J♣ while Tomlin tabled 8♦ 9♦. A 4-5-8 flop put Tomlin in control with a pair of eights, only for a king on the turn to then give Skipper the lead with a pair of kings.

The tables were turned, however, when a 9 on the river gave Tomlin two pair to eliminate Skipper and secure him the title and £89,213 after three days’ play.