The inaugural UKIPT Series event was hosted over the weekend at the Hippodrome Casino in London, with PokerStars Pro Jake Cody claiming the £19,400 first prize. 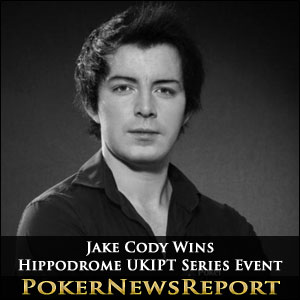 The inaugural UKIPT Series event was hosted over the weekend at the Hippodrome Casino in London, with PokerStars Pro Jake Cody claiming the £19,400 first prize

Played the same as the UKIPT Main Event – but with a £250.00 + £25.00 buy-in and thirty minute levels – the new PokerStars-sponsored UKIPT Series counts as a UKIPT side event for players keen to find themselves on top of the UKIPT leaderboard and the winner of each Series event also gets invited to the UKIPT Champion of Champions tournament at the end of Season 4 to battle it out for a UKIPT Season 5 passport.

With so much to play for in addition to the tournament prize money, 343 players either ponied up the buy-in or qualified online to test out the Hippodrome and its facilities. At the end of two Day 1s, 98 players remained, with Day 1A chip leader Pat Simcoe (220,500 chips) having a commanding advantage over the chasing pack, headed by Nikolay Vasconcelos (183,600 chips) and Enzo Gomez (182,600 chips).

Plenty of Action to Start the Day

Despite the early noon start to Day 2 (blinds 1,200/2,400 – ante 300), there was no hanging about at the tables. Enzo Gomez temporarily took the chip lead when flopping a set of Tens to bust Nick Bell´s pocket Queens, while Jake Cody chipped up from an overnight 89,000 chips to more than 150,000 chips when flopping trip Kings.

Shantanu Banerji then took over the chip lead when his A♥ A♦ busted the 8♦ 8♥ of Cristiano Blanco, while Pat Simcoe could only complain about being chip-dead as he struggled to make recover the chip lead while the action was occurring all around him. After four levels of play, the field had been reduced to just 44 – with just 40 cashing in the event.

No Slowing Down after the Bubble

Mateusz Zbikowski was the unfortunate “Bubble Boy” – getting all his chips in with A♦ K♣ and looking likely to double up against Terry Jordan´s A♣ J♠ until the J♦ was dealt on the flop – and thereafter there was an unhealthy rush to the Cashier´s desk as the field was further reduced to just 26 after six 30-minute Levels of play.

As Level 20 started (blinds 6,000/12,000 – ante), the early chip leaders were washed aside by the surge of Lydia Cugudda. The last lady standing was the first player to chip up to over 1 million chips and then added a further ½ million to her stack when cracking Dominic Burn´s A♦ A♠ with flopped set of Kings.

Her big stack was not to last long however, losing almost half of it to Tim Wong in a massive three-handed pot K♥ K♣ > Q♦ Q♠ > J♠ J♣ which saw the elimination of Rafael Henderson and enabled Wong to take the chip lead to the Final Table.

Jake Cody´s good run started with the elimination of Shantanu Banerji (A♠ Q♠) in eighth place when Banerji could not find the Ace to best Cody´s K♦ K♠. Cody then took a million chip pot against Terry Jordan (A♥ J♠ > Q♥ 10♣) before doubling up against Tim Wong (A♥ 4♥ > A♦ 9♦ after hitting the 4♠ on the Turn), and then crippling the former chip leader by flopping Trip Kings against Wong´s pocket Jacks.

Wong was bust by Cody soon after but, as the table went three-handed, it was Terry Jordan who was in the lead following his earlier double up against Cody (A♦ 5♥ turned a wheel > A♥ J♥) and his elimination of Uzzol Miah in sixth (7♠ 7♦ > 6♠ 6♦).

Jordan´s lead lasted two hands. First he doubled up Lydia Cugudda (A♥ 6♦ > 6♠ 6♣ – Cugudda flopping the A♦) and was then sent to the rail in third when shoving from the button with J♦ 9♥ and running into Jake Cody´s A♣ K♣, enabling Cody to take a 4.34 million -v- 2.28 million chip advantage into the heads-up.