Clyde Tjauw Foe took down the Rotterdam Poker Series Main Event for €53,350 after a heads-up deal with Pascal Vos resulted in a very quick conclusion. 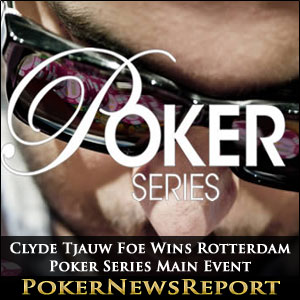 Clyde Tjauw Foe took down the Rotterdam Poker Series Main Event for €53,350 after a heads-up deal with Pascal Vos resulted in a very quick conclusion.

Despite synchronising nicely with the conclusion of the EPT Barcelona, few “international” players headed to the Holland Casino in Rotterdam this weekend, leaving mostly Dutch players to battle out the €1,080 buy-in Main Event of the Rotterdam Poker Series.

The tournament attracted 271 entries – including such notables as Michiel Brummelhuis, Govert Metaal, Kees Aerts, Marcel Vonk and Pieter de Korver; but none of these stars were still involved in the action when the bubble burst on Saturday´s Day 2 – Wouter van den Bijgaart running A♦ K♣ into Mario Grootkerk´s A♥ A♠ – and the final table was set early on Sunday morning when Pascal Vos rivered trip Queens to eliminate Ingo Hackbarth Q♦ J♦ > A♣ K♣.

Returning to the Holland Casino in Rotterdam on Sunday, the ten remaining players were facing blinds of 25,000/50,000 (ante 5,000) and, with three players having less than 20 big blinds, the action was fast and furious from the off. Guy Goosens (5♥ 7♦) flopped two pairs against Abdel Kader (A♥ 6♠) to move up the leaderboard, before Pascal Vos (Q♣ 8♦) flopped a pair of Queens to chip up against Sven Wendt.

Wendt recovered to knock out Leo Soering K♦ K♥ > A♠ 4♥, before Clyde Tjauw Foe (A♠ 9♥) flopped two pairs to bust Tonny van Eck in ninth place. Within an hour Dino Heco was also sent to the rail – eliminated in a three-way pot in which his A♥ J♣ failed to complete a backdoor flush against Misel Draganic´s flopped set of Kings – and before the end of the second level Abdel Kader was also knocked out of the tournament – his 10♣ K♣ making a flush on the River, but not good enough to best Pascal Vos´ flopped Full House of Fives > Queens.

Going into the third level of the day (blinds now 40,000/80,000 – ante 8,000) Clyde Tjauw Foe had a narrow chip lead over Misel Draganic, but the chip lead was to change regularly over the next two levels. Guy Goosens managed to survive an all-in with A♣ 10♥ against Clyde Tjauw Foe´s pocket Queens (putting Draganic in front by default), and then Tjauw Foe (K♦ 10♦) took a further knock to his chip stack in a hand against Sven Wendt (A♣ Q♣) in which both players connected with the flop of K♣ 5♠ A♦.

Sven Wendt took the chip lead when forcing Draganic out of a million chip pot, but then had his Aces cracked by Draganic (10♦ 9♠) in a three-way pot which also saw the demise of Guy Goosens (A♣ Q♦) in sixth place. Misel Draganic moved back to the top of the leaderboard when turning an Ace-high flush against Clyde Tjauw Foe´s flopped two pairs, and then extended his lead by out-kicking Nico Kuan Q♣ J♦ > J♠ 8♠ on a Jack-high board to bust Kuan in fifth place.

Vos Moves to the Top – Leads Going into Heads-Up

As the tournament went four-handed, Pascal Vos moved into the chip lead when doubling up against Draganic Q♥ 10♥ > 10♠ 8♠, and then bust Sven Wendt in fourth place A♣ K♦ > A♦ 10♠ to have almost half the chips in play. However, Vos could not get away from his two opponents, and both Clyde Tjauw Foe and Misel Draganic took chips from the chip leader before Vos caught Draganic bluffing to take a valuable pot with K♦ 2♦ for a flopped pair of Deuces.

Draganic´s ultimate departure came in unusual circumstances. Following the flop of 4♦ 5♣ 4♣, Draganic raised Tjauw Foe´s post-flop bet of 300,000 chips to 650,000. Tjauw Foe queried that Draganic had put the correct number of chips into the pot, and while the dealer was checking his stack, Draganic threw his cards into the muck believing that Tjauw Foe had folded. The hand was awarded to Tjauw Foe, leaving Draganic with less than 2 million chips.

The last of Draganic´s chips went in with A♥ 8♠ against Pascal Vos´ 9♣ 9♥. Draganic missed the board to be eliminated in third, while Pascal Vos took a 7.5 million -v- 6.1 million chip advantage into the heads-up against Clyde Tjauw Foe. A deal was agreed before the heads-up got underway, in which the prize money was split according to ICM calculations (Vos €56,204/Tjauw Foe €53,350) with an entry into the Dutch Open later in the year to play for.

Both players agreed to determine the outcome of the Rotterdam Poker Series Main Event by going all-in blind in the first hand of the heads-up. The dealer dealt out 3♣ 5♣ J♣ / 6♣ / 5♥ before the players´ cards were revealed: