Just four Big Blinds separate the top five players after Day 1A of the Unibet Open in Riga – the “warm-up” event for next week´s Prague Poker Festival. 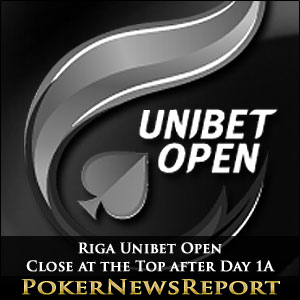 Just four Big Blinds separate the top five players after Day 1A of the Unibet Open in Riga – the “warm-up” event for next week´s Prague Poker Festival.

It might be cold in Prague (day time highs of 2ºC/36ºF), but it is even colder in Riga (0ºC/32ºF), where Day 1A of the Unibet Open Main Event got underway yesterday. Ninety-seven players braved the icy conditions and stumped up the €1,650 buy-in for the Main Event (or qualified online) including Mickey Petersen, Irish Open Champion Ian Simpson and twice beaten Unibet finalist Tomasz Kozub.

Unfortunately for the three big “names”, none of them survived the opening flight of the Riga Unibet Open and, after nine levels of play, Igors Perecs heads the forty-seven players who will carry a chip stack through to Saturday´s Day 2. Perecs (94,800 chips) has a narrow advantage over the UK´s Mark Emmett (91,700 chips), with Finland´s Markus Lehtinen (91,200 chips) half a Big Blind back in third.

Unibet Ambassadors Survive, but Could Do Better

Among the chasing pack are Unibet ambassadors Dan Glimne (47,100 chips) and Tomas Brolin (18,400 chips). Glimne recovered from an uninspiring start to the Main Event to bust out Mickey Petersen (Queens > Nines) in the penultimate level, and he was heading towards the top of the leaderboard before doubling-up Giorgio La Iacona A♠ K♦ > 8♥ 8♦ in one of the last hands of the night.

Former Swedish soccer star – Tomas Brolin – was fairly anonymous throughout the day (much like when he played for Leeds United), and was one of the last players to register for the opening flight of the Unibet Open Main Event. Brolin survived through to Day 2 with a meagre chip stack of 18,400 chips courtesy of a late double-up with Kings > A♦ 10♦, and will have to improve significantly on Saturday if he is to trouble the chip leaders:

Looking Ahead to Day 1B of the Unibet Open

Day 1B of the Riga Unibet Open will get underway at 2.00pm local time (12.00pm GMT), with late registration only available for the first two levels. Among the players already confirmed to take part are former Unibet Open champions Quentin Lecomte, Dan Murariu and Paul Valkenburg, and WSOP “November Niner” Michiel Brummelhuis.

Players at the Royal Casino in Riga will again be given 20,000 starting chips and will have to negotiate a further nine one-hour levels of play if they want to be involved in the climax of the event, which concludes on Sunday. You can find out who wins the 2013 Unibet Open Riga by following @PokerNewsReport on Twitter.