Student Cliff Goldkind has secured his first ever World Series of Poker (WSOP) cash by winning event #19 for $559,514 in Las Vegas. 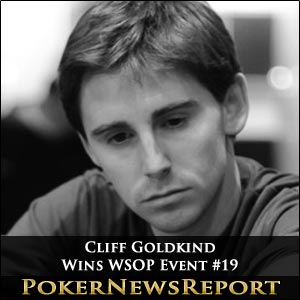 Student Cliff Goldkind has secured his first ever World Series of Poker (WSOP) cash by winning event #19 for $559,514 in Las Vegas.

The 24-year-old – who lives in Maryland but was born in Tampa – outlasted a 2,302-player field to take down the $1,500 buy-in No-Limit Hold’em event at the Rio All-Suite Hotel & Casino, with his final knockout being that of the outgoing Kennii Nguyen.

Goldkind entered his heads-up clash with a huge chip lead over Nguyen and extended that to 9,214,000 against 1,145,000 before the rivals enjoyed dinner break. Maybe they should have played on, though, as it took just one more hand to crown Goldkind as the champion once they had returned.

Nguyen shoved all-in with K♥ J♠ and was called by Goldkind, who showed 6♣ 6♠. The board ran out 2♠ 5♣ 2♥ 10♣ A♥, resulting in the remainder of Nguyen’s chips being slid over to the new champion, who leapt to his feet to celebrate with his family and friends. Nguyen played great poker throughout and was rewarded with $347,036 as runner-up.

The third and final day had started with 17 players – including Barry Shulman, Jason Wheeler, David Peters and Philippe Boucher – still hoping to bag the top prize and gold bracelet.

But Canadian Boucher couldn’t press on and was eliminated in 15th place for $25,048 when his Q♥ 9♦ lost out to the Q♠ Q♣ of Adria Balaguer, while Chicago’s Wheeler – who had started the day well – was also soon packing up his belongings when his A♠ J♦ lost out to Justin McGill’s K♠ K♥. Wheeler exited in 11th place for $31,916.

Georgia’s Ismael Bojang hit the rail in 10th for $31,916 to set up the nine-handed final table in the Rio’s Pavilion Room, with initial chip leader Gary Burks the first to leave in ninth for $41,145.

Burks moved all-in with A♠ K♣, while new chip leader Goldkind found A♦ A♣ to snap-call. The K♦ 9♦ 4♦ flop gave Burks a pair of kings, while the turn brought the K♠ for trips. The Texan just had to avoid diamonds and the final ace, but the J♦ river handed Goldkind a huge pot and a knockout with his flush.

The eliminations came thick and fast thereafter, with Vegas-based Shulman the next to crash in eighth place for $53,669. The final table’s elder statesman shoved all-in with Q♣ 8♣, only to be called Goldkind, who showed A♥ A♦. The A♣ turn provided with a full house to add to the 4♦ and 4♥ on the flop for the knockout.

McGill, of Phoenix, was then eliminated in sixth for $94,815. He had approximately 20 big blinds when he shoved with A♣ 8♣. But Balaguer, of the Marshall Islands, swiftly called with 9♦ 9♠ to see a 8♦ 8♥ 9♣ flop that handed the latter a full house for the knockout.

Adria Balaguer Misses Out on Heads-Up

Malta-based Balaguer was next out in third place for $245,197 when he got unlucky against Goldkind. Goldkind showed 4♥ 4♠ while Balaguer tabled 10♠ 10♣ and set to double-up in successive hands. But a J♦ 4♣ J♥ flop handed Goldkind a full house and the A♣ turn and 7♣ river failed to help Balaguer, who did, however, secure his first WSOP cash.