Writing in Forbes, Sheldon Adelson says “Click Your Mouse and Lose Your House”, should be online gambling’s slogan. The Venetian is part of Adelson’s holdings. 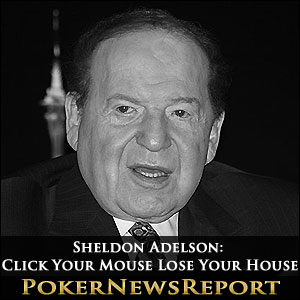 Writing in Forbes, Sheldon Adelson says “Click Your Mouse and Lose Your House”, should be online gambling’s slogan. The Venetian is part of Adelson’s holdings.

Adelson is chairman and CEO of The Sands Las Vegas, which owns the Venetian in Las Vegas, as well as other casinos in the US and in Macau.

In his Forbes article Adelson says, I strongly urge Congress to either rewrite the Federal Wire Act, or pass new legislation making internet gaming illegal nationwide. This would of course overturn the recent state approved legal online poker available in Nevada and coming to Delaware and New Jersey. It would also derail the discussions currently underway in a number of states.

Adelson states that loss of jobs in the US casinos, and possible demise of Native American and racetrack based casinos is his concern. According to Adelson, we’re looking at the loss of 400,000 jobs in the US either directly or indirectly to reduced casino business.

Adelson states that the growth of internet gambling in Europe has resulted in a 20% decrease in visitation to brick and mortar casinos. He says the research also shows that internet gambling revenue has increased by 26 to 28 percent over the past ten years. “That number is bound to worsen as internet gaming dependency grows.”

Adelson is concerned about more than just the loss of jobs and the possible demise of some land based casinos. Putting aside the fact that the Venetian (and most casinos) serves free gamers free alcoholic beverages, he goes on:

…there will be no way to fully determine that each wager has been placed in a rational and consensual manner.
For example, the possibility of underage children finding ways to place online wagers and the possibility of people betting under the influence of drugs or being coerced are all scenarios that can happen when the person is only monitored by their own computer screen.

Adelson is no stranger to controversy, nor is he adverse to lobbying politicians to get what he wants. His company is subject of a Los Angeles grand jury investigation into money laundering, he recently lost a $70 million lawsuit brought by a consultant hired to help with his Macau ventures, and is under investigation for violating anti-bribery statues. During the 2012 elections, he funneled hundreds of millions of dollars to Republican candidates as conservative PACs. He recently met with Spain’s Prime Minister to lobby for the overturn of Spain’s anti-smoking laws for his proposed casino and hotel complex known as “EuroVegas”.

Adelson summed up his view on internet gambling like this: It’s a threat to our society—a toxin which all good people ought to resist.

Online comments at Forbes were immediately mixed, with a great deal of them branding Adelson as out of touch, greedy, and hypocritical. It remains to be seen if his political connections and deep pockets have any effect. Feel free to leave your comment below here, at PokerNewsReport.com too.