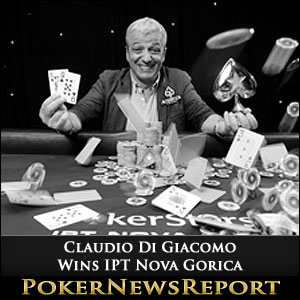 The IPT Nova Gorica Main Event was the first time that a major European Main Event has been played using the ground breaking “accumulator” system – where players have the option of entering multiple Day 1s and taking their combined chip stacks forward into the later stages of the tournament – and it proved exceptionally popular.

The €700.00 buy-in Main Event attracted 715 entries – the majority of them from players buying in more than once (even the PokerStars qualifiers awarded players two entries) – creating a prize pool of €436.937 €uros, with €90,000 €uros up top for the winner.

Claudio Di Giacomo was one of the players who took advantage of the accumulator system to build a substantial stack of chips coming out of the three Day 1s of the IPT Nova Gorica Main Event; and he built on it nicely throughout Day 2 to start the final table fourth in chips behind overnight chip leader Fabrizio D’Agostino.

Caution was abandoned during the opening levels of the IPT Nova Gorica Final Table. Claudio Di Giacomo was reduced to short-stack in one of the first hands of the climax when he doubled up Dario Sammartino, although Maurizio Musso was the first to leave the table when his A♦ K♥ failed to improve past Andrea Benelli´s J♥ J♣.

Di Giacomo managed to double up with pocket Nines against the pocket Fives of Benelli and, at the top of the leaderboard, Andrei Lazar (K♣ K♦) temporarily took the chip lead when getting three streets of value from Fabrizio D’Agostino (A♦ J♦) on a Jack-high board, but then lost most of his gains when attempting to bluff Sammartino out of the next pot – and Sammartino called with Ace-high to relieve Lazar of over one million chips.

The final table of the IPT Nova Gorica was quickly reduced in size after Marco Venturi had shoved with K♣ J♣ and was called by Andrea Bellini – whose A♦ K♠ held to bust Venturi in eighth. Walter Coan (K♣ Q♥) was soon to join Venturi on the rail when his ill-timed shove on the flop of 10♦ 5♦ 6♠ was called by Claudio Di Giacomo (J♥ 10♣) whose flopped pair of Tens held, and Fabrizio D’Agostino extended his chip lead after first crippling Bellini (10♠ 10♥ > A♠ Q♣) and then finishing the job A♣ K♣ > K♦ J♦.

Dario Sammartino´s aspirations of a last-to-first victory in the IPT Nova Gorica Main Event were blown out of the water when Claudio Di Giacomo had a lucky escape. On a board of 9♥ 8♠ K♣ / 6♠, Sammartino (8♦ 9♦) called Di Giacomo´s shove with J♠ 7♥. Fortunately for Di Giacomo, the 5♥ was dealt on the river to keep him in the tournament, while Sammartino was reduced to being the short-stack. Sammartino´s elimination was also unfortunate, as his 8♥ 5♦ was leading Andrei Lazar´s A♥ 9♣ until the 9♥ on the river gave Lazar a higher pair and Sammartino left the tournament in fifth place.

The relatively quiet Pier Paolo Fabretti was responsible for the eliminations of Andrei Lazar and Fabrizio D’Agostino. Lazar chose the wrong moment to get the last of his chips into the middle with Q♣ 9♠ and was sent to the rail by Fabretti´s A♣ K♥, while D´Agostino felt that two clubs on the flop justified a shove with A♣ 2♣, but the third club failed to appear on the Turn or River, and he was bust out in third place by Fabretti´s 9♠ 9♣.

Going into the heads-up, Claudio Di Giacomo and Pier Paolo Fabretti were evenly matched in chips, and the advantage swung back and forth for a long time without any player being able to dominate the climax of the IPT Nova Gorica Main Event. Eventually Di Giacomo enjoyed a decent spell of cards, which enabled him to develop a 14 million -v- 3 million chip advantage and, when Di Giacomo shoved with K♥ 9♣ on a flop of 9♠ 4♦ 2♥, Fabretti took a chance that he was bluffing and called with 7♣ 7♥}. Fabretti´s two-outer failed to appear, and Di Giacomo was IPT Nova Gorica champion.

There were several good recoveries during the final table of the IPT Nova Gorica Main Event. Dario Sammartino was unlucky to be eliminated in fifth when he had started the day as short-stack, and Fabretti was at one point in danger of elimination when the table was four-handed. However, the best recovery was by Claudio Di Giacomo, who won the tournament after being crippled in one of the first hands of the day.