After a year which has seen the value of Bwin.party shares almost halve in value, economic forecasters predict a further slump in the company´s fortunes. 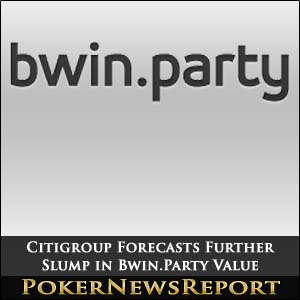 After a year which has seen the value of Bwin.party shares almost halve in value, economic forecasters predict a further slump in the company´s fortunes.

International financial services company – Citigroup – issued a warning to investors in Bwin.party yesterday that the share price for the company was likely to fall even further over the coming weeks and advised them to “Sell! Sell! Sell!”. Stock in Bwin.party was yesterday trading at around £0.97 – down from a high at the beginning of the year of £1.77 – but analysts predict that a fall to around £0.77 is likely before the price of the shares settles.

The negative forecast is attributed to higher taxes throughout Europe and a possible exit from the German market for both the poker and the casino operations. Furthermore, says London analyst James Ainley, Bwin.party´s entry into the US market in 2013 is unlikely to bring the company a reversal of fortunes, with the likely intense competition (from the likes of PokerStars and 888.Poker) reducing its market share forecast to no more than 10 percent in the States.

This will not be the news that the company or investors wanted to hear following the limp introduction of Fast Forward Poker failed to increase the volume of traffic to the respective poker rooms – leaving Party Poker a good 20 percent behind the iPoker network. It would appear that the company may have to review its policy of trying to appeal to the recreational player and take a chance by reducing its rake structure in order to reverse the trend of players leaving the Party!