Attempting to expand its reach beyond horse racing, Churchill Downs Inc. has applied for a license to provide online poker in Nevada. 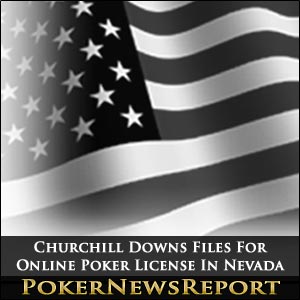 Attempting to expand its reach beyond horse racing, Churchill Downs Inc. has applied for a license to provide online poker in Nevada.

Joining a list of applicants that now numbers roughly three dozen, the owners of the Kentucky racetrack that has hosted the famed Kentucky Derby for 137 years are hoping to receive approval from Nevada gaming officials to offer online poker in the Silver State.

The application comes on the heels of the company’s purchase of Bluff Media in February, a poker-related entity that includes the websites Bluff.com, BluffPoker.com and BluffMagazine.com. Churchill Downs Inc. is the biggest online horse-racing company in America, but is not wearing blinders and has its sights on entering the U.S. online poker marketplace. The company is already experienced in online wagering through its twinspires.com site that offers online betting for ractracks throughout the country, including its own racetracks of Arlington Park in Illinois, Fair Grounds Race Course & Slots in Louisiana, Calder Casino & Race Course in Florida, and Harlow’s Casino Resort & Hotel in Mississippi.

Nevada is an important regulatory body and we felt that it was important to be part of the process early on, said Ted Gay, Churchill Downs’ chief strategy officer, to eGamingReview. Gay added that the company’s branching out into the online poker marketplace will be a huge challenge, but we have been an online operator for several years, so in many ways we have an advantage over the land-based [casino] companies.

Churchill Downs is known to be in discussions with providers such as Playtech and Ongame regarding a launching of an Internet poker network of its own. The Louisville-based company is reportedly seeking to form several partnerships in order to increase the player pool of its planned online poker network. With its reach already extended to a handful of states via its horse-racing tracks, Churchill Downs looks to be in a winning position if interstate poker is eventually legalized in the U.S.

Kentucky has a wonderful reputation internationally for horse racing, as the “Run For The Roses” has been a staple of the industry for years. However, the Bluegrass State is void of brick and mortar casino gambling. A proposal to allow casinos failed to meet legislative approval in February. Along with its foray into the Nevada online poker scene, Churchill Downs is also known to be seeking an online poker license in California if the Senate approves the latest amendments to the Internet poker bill being proposed in the Golden State.

Nevada gaming officials approved online poker licenses for Bally Technologies and International Game Technology last month. Shuffle Master is the third company to have its application considered and has received suitability approval thus far. Formal approval is expected later this month. Churchill Downs hopes to join those companies and be among the first to provide online poker to Nevada residents and visitors.