Michigan’s Chuck Tonne holds the chip lead after Day 1 of the $1,500 buy-in Pot-Limit Omaha event #11 at the World Series of Poker (WSOP) in Las Vegas. 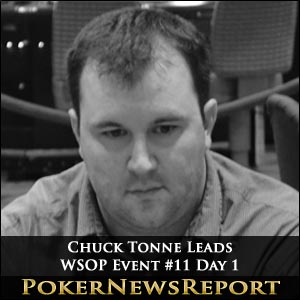 Michigan’s Chuck Tonne holds the chip lead after Day 1 of the $1,500 buy-in Pot-Limit Omaha event #11 at the World Series of Poker (WSOP) in Las Vegas.

Tonne holds a healthy chip lead over second placed Susi Zhao, of Chicago, with the former bagging up with 191,700 against his rival’s 134,000.

In what was a fast and furious opening day, the 970-entry field, which produced a $1,309,500 prize pool, was chopped down to 117 survivors for Day 2 – all of whom will be paid after the money bubble burst late last night at the end of 10 levels.

Play was hand-for-hand when the players enjoyed a short break to return for five more hands when Zhao climbed into second place on the chip counts after eliminating San Diego’s Colin Wickersheim as the bubble boy on the last hand of the day.

Poor Arieh, though. The pro from Georgia took to microblogging website Twitter to write on his golferjosh account: Obviously not a good multitasker. Out of the 5k stud, but have a good pile in PLO. This is where I’m supposed to be anyway! #FKstud. It was not a good sign – and Arieh was out of both events inside of 30 minutes.

Additionally, two of this year’s bracelet winners – Florida’s Force and Illinois’ Nick Jivkov – entered this event, but the former, who won the $3,000 buy-in Heads-Up No-Limit Hold’em/Pot-Limit Omaha event #3 for $207,708, crashed out early in his quest for a second title.

Before concluding, though, Phil Hellmuth got a bit hot under the collar when crashing out to a very satisfied looking Chris Tryba.

Vegas-based Tryba has a history with Hellmuth – although ‘The Poker Brat’ appears to have forgotten this. Back in 2004, Hellmuth scored a bad beat over Tryba, before then rubbing salt into the wounds by giving the beaten player some needle.

But Tryba, with a pair of kings, a queen and a nine, gained some revenge yesterday by spiking a king on the flop to score trip kings and beat Hellmuth – who held three aces and a nine – as only two of those aces could count.

The 11-time WSOP bracelet winner was not impressed and said: I don’t remember you from Adam, buddy, as he left the table, leaving Tryba with a pleasant groin on his face.

Day 2 will see play continue to a final table or through 10 levels, whichever comes first.