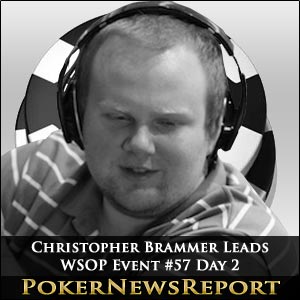 British player Christopher Brammer tops the leaderboard after Day 2 of the $10,000 buy-in No-Limit Hold’em Six-Handed event #57 at the World Series of Poker.

Ten more levels were played out on the second day, with Hampshire’s Brammer on top with 1,467,000 chips as the field was cut back to 27 survivors – who will all be chasing the gold bracelet and $1,136,197 reserved for the winner at the Rio All-Suite Hotel & Casino in Las Vegas.