With a little over six weeks to go until Christmas, 888Poker is getting into the season of giving with its $12,000-per-day gift showers giveaway promotion. 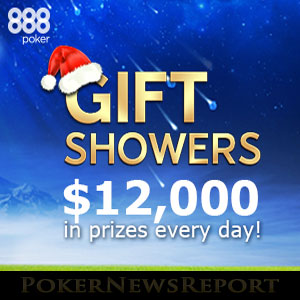 With a little over six weeks to go until Christmas, 888Poker is getting into the season of giving with its $12,000-per-day gift showers giveaway promotion.

Stuck for that special Christmas gift to fill somebodies stocking? Always wanted an iPhone 6s, but talked yourself out of it? Maybe you could just do with some extra cash in the run-up to the festive season? Well, now you can have it all thanks to 888Poker´s Christmas Gift Showers promotion.

The Christmas Gift Showers promotion is a real selection box of gifts and cash prizes for players. 888Poker is running daily free-to-enter tournaments in which players can win iPhone 6s, PlayStation 4s and Go Pro cameras, and weekly “Starburst” freerolls with a Macbook Air and Apple TV packages up for grabs.

On top of that, three “Lucky Star” tournaments are scheduled for each day up until the 4th January 2016 – each having $2,000 in guaranteed prize pools. How can you get your hands on some of these festive goodies? We´ll tell you!

Existing players should already have received an email notification about the “All-In Gift Shower” tournaments that take place daily at 18:05 pm (GMT), plus their first free entry ticket. Extra tickets can be won each day by completing an “888Poker Mission” or through the “Star Spin” game.

The 888Poker Missions are fairly easy to complete and consist of:

You only have to complete one mission each day to be eligible for an entry to the daily “All-In Gift Shower” tournament; and, if you complete two or more missions, you can save your entries up for future tournaments.

The “Star Spin” game is open to anybody who has made a real money deposit at 888Poker (non-depositing players get one free spin during the promotional period). To play it, simply log into your account and click on the entry pop-up in the lobby. The game will open up automatically and all you have to do is spin the wheel to win one of these prizes for free:

You do not even have to play poker or have a bet of any description to qualify for the “Star Spin” game. Just remember to log in to your 888Poker account every day for the chance to win more entries into the Christmas Gift Shower events.

The weekly “Starburst” tournament – the one with all the top gifts – takes place on Saturdays at 21:05 pm. In order to qualify for a seat at the table, players must complete a weekly mission set by 888Poker and emailed to each individual player on a Sunday. The weekly mission will be based upon a player´s previous action at 888Poker, so each player´s weekly mission is likely to be different.

You should have already received your first ticket to an 888Poker “Lucky Star” tournament. Further tickets can be won in the “Star Spin” game mentioned above. Players making a deposit into their accounts will also be awarded extra entries into the tournaments, and watch out for further free entries by following 888Poker on Twitter or visiting the site´s Facebook page.