With just over one week to go until the deadline passes for vetoing New Jersey´s Online Gaming Bill, Governor Chris Christie remains undecided over its fate. 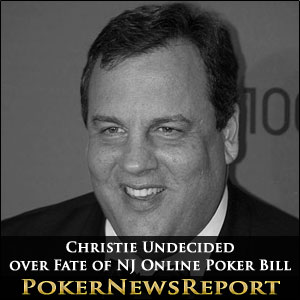 With just over one week to go until the deadline passes for vetoing New Jersey´s Online Gaming Bill, Governor Chris Christie remains undecided over its fate.

Governor Christie indicated during the weekly ‘Ask the Governor’ radio program on New Jersey 101.5FM that he still has reservations about allowing New Jersey´s Online Gaming Bill (A2578) into law. Responding to a question asked by ‘Joseph in Atlantic City’, the Governor acknowledged that he still had the bill sitting on his desk, but there were two things he was most concerned about.

The first is that I don’t know that it really will help Atlantic City announced the Governor. I’m concerned that it may drive traffic away from Atlantic City – that if people can gamble in their own homes on their laptops, why are they going to go to Atlantic City? And I think it’s contrary to what we’re trying to accomplish there.

Secondly, I’m also really concerned about setting up a whole new generation of addicted gamblers. You know, if you can sit on the edge on your bed on your laptop and gamble away the paycheck – that’s a lot different than making the decision to go down to Atlantic City to gamble in a casino. So I’ve got those two concerns.

Final Decision Due by February 4

The Governor concluded his answer to Joseph by saying that he had reviewed the bill last weekend and will do so again this coming weekend after a further brief from his staff. However, many observers believe that Christie´s comments on the radio program have already indicated the fate of the proposed legislation.

Christie´s comments about people being able to gamble on their laptops and thereby stay away from Atlantic City are in complete contrast to his comments earlier in the year when he said “I think New Jersey should be in that [online gaming] business. I think we should be an epicentre for that business”. Furthermore, those who want to sit on the end of their bed and gamble away their pay cheque, already have the opportunity to do so through out-of-State horse racing sites.

Revenues in Atlantic City fell 8% last year as potential customers stayed at home because of the financial crisis or visited other casinos in Maryland, Pennsylvania and New York. Superstorm Sandy may have caused chaos in October, but it could not be blamed for the sixth consecutive year in which Atlantic City revenues have fallen. Atlantic City needs all the help it can get, and the income from online gaming servers located in Atlantic City would more than compensate for any ‘stay-away’ gamblers.

Is There an Ulterior Motive for Christie´s Delay?

Despite the State Assembly and State Senate giving their overwhelming support to the bill, there may be other motives for Governor Christie´s reticence to sign the online gaming bill into law. Although the Republican governor is understood to be personally neither pro or anti online gambling, the stance taken by his party – and that of primary party benefactor Sheldon Adelson – is definitely against online poker in the US.

To sign New Jersey´s online gaming bill into law could dent Governor Christie´s political aspirations of becoming a presidential nominee in 2016 and sponsor of the bill – Democratic senator Raymond Lesniak – believes that this consideration could have more influence on Christie´s decision than any other. Lesniak has gone on record as saying that should Christie use his veto to prevent New Jersey´s online gaming bill becoming law, there would be no point in continuing to introduce online poker in New Jersey while Governor Chris Christie remains in office.