New Jersey Gov. Chris Christie indicated that he is prepared to sign the state’s modified Internet gambling bill within a day or two once it reaches his desk. 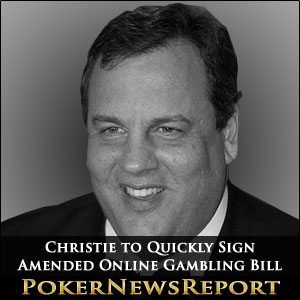 New Jersey Gov. Chris Christie indicated that he is prepared to sign the state’s modified Internet gambling bill within a day or two once it reaches his desk.

After taking the full 45 days at his disposal in which to conditionally veto the bill, Christie sees no point in further delays if the legislature approves of his proposed changes. The State Senate and Assembly are expected to vote on the conditions proposed by the governor next week.

Christie recommended that the casinos that operate online gaming be required to pay a higher tax rate and that the legislation be limited to a 10-year trial period subject to possible renewal. Lawmakers, including the bill’s sponsor Sen. Raymond Lesniak, have indicated that they are not opposed to Christie’s conditions.

The governor is scheduled to address budgetary concerns on Feb. 26 and both houses will convene in order to hear his speech. The legislature will also vote on the amendments at that time.

Another recommendation made by Christie in his conditional veto that has been overlooked in previous news reports is that the Garden State’s online gambling scheme be conducted in a transparent fashion. Christie proposed a number of legal and ethical protections such as requiring lawmakers to disclose past or present affiliations with companies that apply for online gaming licenses.

If Christie is true to his word and signs the bill quickly, New Jersey would follow Nevada and Delaware and become the nation’s third state to enact online gambling regulations. The speed in which he does so could play a part in determining which state will be first to operate Internet gambling sites.

Delaware recently issued a request for proposals for vendors to bid on providing online gambling services that set a deadline of Sept. 30 for sites to be operational. New Jersey has a shot at beating Delaware to the punch and having sites up and running prior to that date. The state that ends up being first has a better opportunity to become a hub of online wagering. Nevada looks as though it will have real money online poker sites prior to either Delaware or New Jersey, but will not be offering other casino games.