After a hectic second day of the 2014 Borgata Winter Poker Open, Christian Lusardi has a massive chip advantage after the three opening flights of Event #1. 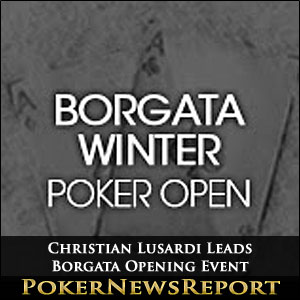 After a hectic second day of the 2014 Borgata Winter Poker Open, Christian Lusardi has a massive chip advantage after the three opening flights of Event #1.

It was a colossally busy day at the Borgata Hotel Casino and Spa in Atlantic City yesterday, as thousands of players competed in the ambitiously scheduled Day 1B and Day 1C of the series´ opening event. Following Tuesday´s massive turnout which resulted in 1,212 entries into the unlimited re-entry tournament, a further 2,094 entries were recorded in the first of Wednesday´s two sessions, with the numbers unknown as yet for the second session of the day.

For some it was also a very long day. Many who failed to progress into today´s Day 2 in the first session – or who only had miniscule stacks to carry forward – leapt into the second sixteen-level session; and players such as defending WPT Winter Poker Open Main Event Champion Andy Hwang, Dan Heimiller, Matt Stout and John D´Agostino each sat through more than twelve hours of poker to ultimately be eliminated before play for the day came to a close.

When the dust had settled on the Day 1B session of the Borgata Winter Poker Open Event #1, Christian Lusardi emerged as the massive chip leader, having bagged and tagged 519,000 chips. In comparison to the 372,000 chips bagged up by Day 1A chip leader Torrey Korsog, Lusardi had a substantial lead over the rest of the Day 1B field – in second place was Hollywood actor James Wood with 410,500 chips – and his substantial chip stack was later confirmed as the biggest going into Day 2.

As with all of the “major” Borgata Winter Poker Open events, Christian Lusardi collected a $2,000 bonus for finishing an opening flight as chip leader (Woods picked up a $1,000 bonus for finishing second) and the survivors from the first session took a well-earned break in order to prepared for today´s Day 2. Unfortunately for those who failed to complete Day 1B, and then fired another bullet to enter Day 1C, play on Day 2 gets underway at noon on Thursday – meaning that some players will only get nine hours rest before the cards are in the air once again.

While the chips from Day 1B were still being bagged and tagged, thousands more players took their seats in the Borgata Hotel Casino and Spa for the second session of the day. Players who failed to progress through Day 1B and a new mass of players who could not attend the earlier session packed out the casino in an attempt to grab a share of the $2 guaranteed million prize pool (which will be smashed once all the numbers are added up).

At the end of the session, the chip leader was New Jersey local Andre Nyffeler; who had recovered from being reduced to 2,100 chips to bag and tag 327,000 chips – courtesy of some fairly amazing hands. Nyffeler twice hit backdoor flushes with 10♥ 10♣ > K♦ K♣ and A♥ K♠ > A♠ A♣ when his elimination was imminent, and due to his good fortune occupies sixth place on the overall leaderboard.

While organizers are still counting the numbers, it is still not known how many players progressed through to today´s Day 2 or what they are playing for. It is likely that a new record will be set for a US poker tournament played outside of Las Vegas, and what is known for sure is that the tournament will resume on Level 17 (blinds 2,500/5,000 – ante 500) and that play is scheduled to continue until just 18 players remain.

It could be another very long day at the Borgata Winter Poker Open!