Vanzieleghem picked up his first major win by taking down the European Deepstack Poker Championship , and he also revenged his Day 1a knockout at the hands of Julien Deveau. 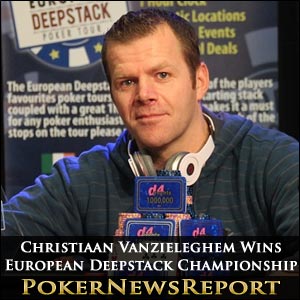 Belgian Christiaan Vanzieleghem didn’t just pick up his first major win by taking down the European Deepstack Poker Championship V main event in Dublin, he also gained revenge for his Day 1a knockout at the hands of Julien Deveau.

Vanzieleghem led a Belgian charge in the Irish capital city’s Ballsbridge Inn as two more of his countrymen – Youry De Winter and Thomas Boivin – made the top 10 in the €550 buy-in main event, although it was the first-named who collected the top prize of €53,500 after defeating French player Deveau heads-up.

The European Deepstack victory wasn’t only Vanzieleghem’s first title, though, as the $70,992 he collected for victory is also his biggest cash at a live tournament – overtaking the $65,829 he pocketed as runner-up from the €730 buy-in No-Limit Hold’em main event of the Belgian Poker Series in Blankenberge early last September.

It certainly didn’t seem likely that Vanzieleghem would emerge victorious after Deveau eliminated him on Day 1a. But the Belgian took advantage of the re-entry facility on the second opening-day stream to storm to victory after topping the chips leaderboard on Day 1b and Day 2.

However, with play three-handed, Vanzieleghem, Deveau and Benjamin Dadon agreed a deal, which would see the champion handed a little extra money – €3,500 – before they got down to deciding the head-to-head that would ultimately secure the victor the top prize and a trophy.

Vanzieleghem and Deveau went at it from the start when heads-up play began following Frenchman Dadon’s exit in third place for €50,000 as he had been chip leader when the three-player deal was struck.

Neither player seemed happy to wait around for a huge hand – and all the chips hit the felt very soon after Dadon’s elimination.

The French player then check-called Vanzieleghem’s 600,00 bet for the 8♥ to arrive on the turn, resulting in the Belgian moving all-in.

Deveau called with A♦ 2♥ to find himself massively dominated by the A♥ 7♣ held by Vanzieleghem.

Deveau was not beaten just yet as any eight or nine would split the pot, but was left disappointed when the Q♣ arrived on the river to hand the Belgian the title and leave the French player with €40,000 – €10,000 less than Dadon following the three-handed deal – as runner-up.

De Winter left Dublin with €25,150 for his fourth-place finish, while Frenchman Anthony Guibert picked up €17,500 in fifth.

The sixth season of the European Deepstack Poker Tour (EDSPT) kicks off next month with the Czech Deepstack Poker Championship in Prague, which runs from March 21 to 25.