Christensen survived an absorbing weekend of poker at the Montesino Casino in Vienna to emerge as the victor of the World Poker Tour Vienna Main Event . 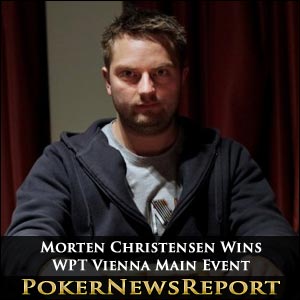 The diminutive Morten Christensen survived an absorbing weekend of poker at the Montesino Casino in Vienna to emerge as the victor of the World Poker Tour Vienna Main Event and extend an incredible run of Danish victories in major live poker events.

Following the victories of Mickey Petersen (EPT Copenhagen – February 2012) Frederik Jensen (EPT Madrid – March 2012) and most recently Jannick Wrang (EPT Campione – March 2012), Christensen saw off a field of 396 to become the latest member of the WPT Champions Club and collect a winner´s cheque of $410,519.

Always There or Thereabouts

Christensen´s route to victory was built on a strong presence throughout the tournament. The online qualifier for the event took the chip lead on Day 2, was among the first to cross the 1 million chip threshold on Day 3 and was lying in second place behind Serbian poker player Ognjen Sekularac as the final six players took their seats yesterday.

The Tournament of Suck-Outs Continues

The WPT Vienna has been remarkable for some incredible hands and devastating defeats. Ferenc Gal´s set over set over set, Darko Stojanovic´s Ace-rag backdoor straight over Steve O´Dwyer´s K♣ K♦ and Vicenzo Natale´s elimination with the nut full house against Ben Wilinofsky´s flopped quad 4´s were just a few of the highlights witnessed at this tournament so far, and the suck-out´s were to continue of the final table with Ben Wilinofsky again being a major beneficiary.

Shoving all-in with K♦ J♦ against Norbert Szecsi (Q♠ Q♥), Wilinofsky’s title aspirations look to have taken a knock on a flop of 8♦ 8♣ 2♦, but the A♦ A♠ on the turn and river gave the Canadian the flush and sent Szecsi to the rail. Konstantin Tolokno, who was still in the tournament courtesy of coming from behind against Jozef Bartalos’  K♦ K♣ on Day 3, came from behind again to eliminate Goswin Siemsen in fifth when his A♣ 10♥ found the 10♠ on the flop to master Siemsen’s A♥ Q♥.

Christensen Rises to the Top

Morten Christensen’s ascension to the top of the chip counts came at the expense of Ognjen Sekularac, who moved all-in on a flop of A♣ J♣ 9♠ holding 5♣ 3♣. Christensen called with A♠ 10♣ and the 6♥ J♥ on the turn and river enabled to move Christensen head and shoulders above his three adversaries. Sekularac’s demise continued when he doubled up both Wilinofsky and Tolokno – with Tolokno eventually putting the Serbian out of his misery in a A♦ Q♥ -v- A♥ J♥ race.

Heads-Up is Karmatic Experience for Tolokno

A good heads-up battle ensued, during which Konstantin Tolokno almost levelled the chip counts through some aggressive c-betting. However, the “tournament of suck-outs” returned to haunt Tolokno (10♦ 2♦) who was leading a 1 million chip pot with a paired 10 on a board of J♣ 7♣ 3♥ / 10♠. The river card of Q♣ prompted a bet of 800,000 from Christensen (A♣ 2♣) which Tolokno called and instantly regretted when he saw Christensen´s rivered flush.

Christensen´s big win delivered some much-needed momentum to his game, and he now became the primary aggressor – eating into Tolokno´s chip stack with every opportunity. With a dozen hands the game came to a natural conclusion when Christensen´s A♥ 8♥ connected with the A♠ on the flop the master Tolokno´s K♠ 8♠ and the diminutive Dane was crowned as the latest WPT Champion.

Not a Bad Day´s Work if You Can Get It

The final positions and pay outs for the WPT Vienna Main Event were:-