Chris Moorman gave a masterclass performance at the WPT LA Poker Classic final table to demolish hopes of a home victory and claim the $1,015,460 first prize. 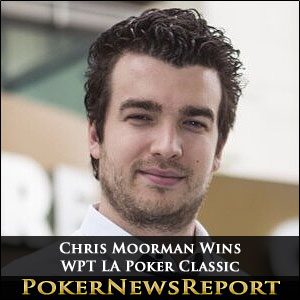 Chris Moorman gave a masterclass performance at the WPT LA Poker Classic final table to demolish hopes of a home victory and claim the $1,015,460 first prize.

The world´s best online poker player – Chris Moorman – showed he is equally a force to be reckoned with in a live poker environment when taking down the WPT LA Poker Classic for the second seven-figure score of his career.

Throughout the nine hours it took to complete the six-handed final table, Moorman pressured his opponents into mistakes and – when things did not go entirely to plan – he recovered to bust out four of his final table opponents and become the latest member of the WPT Champions Club.

Going into the final table, Moorman was most people´s favourite to take the WPT LA Poker Classic despite being second in chips to overnight leader Michael Rocco. Moorman also had to overcome two WSOP bracelet winners – Patrick Bruel and Adam Friedman – if he was going to add a WPT title to his impressive resume.

Moorman Goes Up then Down – Friedman First to Bust

When the final table got underway at the Commerce Casino, the tournament was a few hands short of going in Level 26 (blinds 20,000/40,000 – ante 5,000). Chris Moorman started well enough – winning six of the first nine hands – but was forced out of a 1.8 million chip pot by Michael Rocco to be reduced below his starting stack.

During the early action, Adam Friedman had lost half his stack to Josh Neufeld when Neufeld flopped a Seven-high straight and, down to his last fourteen big blinds, Friedman moved all-in with 4♥ 4♦ and received a call from Glenn Lafaye (A♥ J♠). Lafaye paired his Ace on the flop and Friedman was eliminated from the WPT LA Poker Classic final table in sixth place.

Chris Moorman recovered the chips he had lost to Michael Rocco with interest when he shoved all-in to a pot already containing 3.8 million chips and forced a fold from Rocco. He then eliminated Josh Neufeld in fifth 10♣ 10♦ > A♥ 10♥ to have half the chips in play in front of him, but could not shake off Michael Rocco.

Michael Rocco forced Chris Moorman out of another substantial pot to level the chip counts between the two players, and then took four out of the next five pots to open a gap between the two chip leaders. Moorman was heard to say, I don´t know what to do about this guy to one of his supporters on the rail, and things got worse for Chris Moorman shortly after, when Glenn Lafaye took him for 1.6 million chips a few hands later with a paired Queen.

Moorman Back on Track – Busts Bruel, but Chopped Back Down by Lafaye

Moorman´s recovery came courtesy of a flopped paired of Threes against Patrick Bruel and some fairly aggressive pre-flop betting. By the time Level 30 came to a close, Chris Moorman and Patrick Bruel had exchanged places on the leaderboard, and this enabled Chris Moorman to call Bruel´s shove following the flop of J♥ 8♠ 2♣. Bruel turned over K♣ 8♣ for a pair of Eights, but he failed to improve past Moorman´s (A♣ J♣) flopped pair of Jacks and was eliminated in fourth place.

With his enhanced chip stack, Chris Moorman started to target Glen Lafaye – who had taken the chip lead from Michael Rocco after a failed Rocco bluff – however, one huge pot in which Lafaye flopped a set of Deuces against Chris Moorman´s K♣ K♠, reduced Moorman´s stack back down to 2 million chips.

The pivotal hand of the WPT LA Poker Classic came at the end of Level 31 (60,000/120,000 – ante 20,000). Glenn Lafaye had raised to 325,000 chips from the button, and Michael Rocco moved all-in from the Small Blind. Chris Moorman shoved over the top from the Big Blind and Glenn Lafaye made the call – knowing that if his hand was to hold, victory the WPT LA Poker Classic would be his:

The flop of K♥ Q♠ J♥ gave Glenn Lafaye two pairs, while both Chris Moorman and Michael Rocco both had draws to a Straight. The 3♠ on the Turn was a blank, and Lafaye would accomplish a dual knockout and victory in the event if he could avoid an Ace, a Ten or a Nine on the River. Dramatically, the A♠ was dealt on the River – giving Chris Moorman a virtual triple up and eliminating Michael Rocco in third place.

Lafaye Leads into Heads Up, but Moorman Pressure Wins the Day

Despite Chris Moorman´s triple up, Glenn Lafaye held an 8.275 million -v- 7.75 million chip advantage going into the heads-up. However, his lead was not to last for long, as Moorman applied the pressure, and reduced his opponent´s stack to less than two million chips without a single hand going to showdown. Lafaye managed one double-up when his A♠ Q♠ out-kicked Moorman´s Q♣ 5♥ on a Queen-high board, but Glenn Lafaye´s participation in the WPT LA Poker Classic was only going to last five more hands.

Chris Moorman: A♥ A♦ for an over-pair

Lafaye needed to hit either end of his draw to stay alive in the tournament, but the Q♥ on the Turn and 5♦ on the River quietened the American´s rail and gave Chris Moorman victory in the WPT LA Poker Classic.