Ultimate online grinder Chris “moorman1” Moorman is only $92k away from accomplishing a truly historic goal to eclipe $10 million in online tournament earnings. 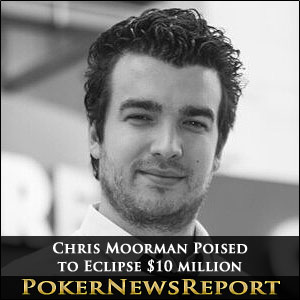 Ultimate online grinder Chris “moorman1” Moorman is only $92k away from accomplishing a truly historic goal to eclipe $10 million in online tournament earnings.

Chris “moorman1” Moorman began playing online tournaments in 2006. For the next three years, he amassed an impressive win percentage that included a myriad of top three finishes. Despite his accolades, he wouldn’t post a six-figure score until April, 2009. It was then that he finished in eighth place in the PokerStars WCOOP Main Event. His final table appearance was good for $112,950.

To put his accomplishment into perspective, only 19 players have achieved live tournament earnings of $10 million or more. Some, like Antonio Esfandiari eclipsed the $10 million mark by winning one tournament. Others, like 13-time bracelet winner Phil Hellmuth, have been playing in live tournaments for the better part of 25 years.

But online tournament players are hardly afforded the same luxuries as live players. For those who play on the virtual felt, life is a grind. Tournaments that payout six-figures for first are relatively few and far between, playing fields are significantly larger, and reading an opponent’s facial expressions and physical tendencies is impossible from behind a the veil of a computer screen.

Yes, Chris Moorman accomplished his goal the hard way: by adjusting his strategies, knowing the math and understanding his opponents betting patterns. Over the course of the past seven years, Moorman has used this knowledge en route to 5,856 tournament cashes, an unprecedented 545 third place or higher finishes, and 223 titles.

Along the way, Moorman has won 15 triple crowns. A triple crown in online poker is a vaulted accomplishment achieved by winning at least three tournaments in one week, with each of those victories taking place on a different site. Moorman has four more triple crowns than his nearest competitor, “Belabacsi.”

Chris’s live game isn’t too shabby either. To date, he has placed second in two bracelet events, including the 2011 WSOPE Main Event. He’s also made an EPT final table. His live career earnings reside at nearly $3 million.

When asked about his soon-to-be accomplishment, Moorman displayed class and humility:

To be able to wake up and get to do something I love every day makes me feel truly blessed. I feel that the 10 million milestone is a testament to my dedication and ultimate passion for the game of poker and challenging myself to be the best that I can be.

Shockingly, Moorman is only 27 years old.