The deck of cards used in the World Series of Poker (WSOP) Main Event in 2003 in which Chris Moneymaker defeated Sam Farha, which many have credited as the impetus for the massive jump in poker’s popularity, has been put up for auction on eBay. 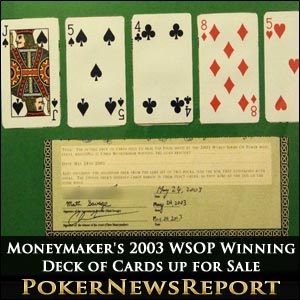 The deck of cards used in the World Series of Poker (WSOP) Main Event in 2003 in which Chris Moneymaker defeated Sam Farha, which many have credited as the impetus for the massive jump in poker’s popularity, has been put up for auction on eBay.

The previously unknown Chris Moneymaker won a seat to the $10,000 WSOP Main Event in 2003 via a $40 satellite tourney on PokerStars. The field in 2003 consisted of 839 players. Following Moneymaker’s dramatic win, 2004 saw the field jump to 2,575, three times the previous year’s entries. The player buy-ins also shot up in 2005 with 5,619, doubling the number of entries in 2004 and increasing by seven times the number of players in the year Moneymaker took home the bracelet. Seemingly overnight, Moneymaker’s success as an amateur who made good and achieved poker immortality had many other poker players from around the world wanting to take their shot at poker stardom.

The starting price for the playing cards is $7,500 and, as of this writing, no bids have yet been made. The deck comes complete with a Certificate of Authenticity signed by Moneymaker and tournament director Matt Savage, in addition to a tape of the ESPN broadcast of the action between the final two players. There is plenty of time left to place a bid as the auction will run until the evening of Nov. 7.

The seller is said to be a former employee of the casino, “working behind the scenes at Binion’s Horseshoe.” After receiving permission from his bosses to take the deck, the quick-thinking casino worker “carefully placed all of the cards from that final hand on top of the rest of the deck, kept in sequence, along with the dealer’s cut card, and put the complete deck back into the double Kem box along with the unused deck.”

On the final hand of poker and WSOP history, Farha was holding J♥ 10♦ and bet $100,000. With a chip advantage of about $6.5 million to $1.89 million, Moneymaker called with 5♦ 4♠. The flop came J♠ 5♠ 4♣, giving Moneymaker two pair, while Farha had top pair with jacks. After Moneymaker checked, Farha bet $175,000. Moneymaker check-raised an additional $275,000. Farha shoved in his remaining chips and Moneymaker didn’t hesitate to call. The turn of 8♦ and river 5♥ gave Moneymaker a full house to two pair for Farha. Moneymaker won the title, pocketing $2.5 million, and forever changing the course of poker.

Other poker memorabilia have been auctioned on eBay in recent years. Brad Daugherty and T.J. Cloutier each put bracelets won in WSOP preliminary events on the block. Cake Poker bought Cloutier’s bracelet and gave it back to him, while Daugherty’s winning memento found no takers. Peter Eastgate won the WSOP Main Event in 2008 and sold his bracelet for $147,000, donating the proceeds to charity.

Click here if you want to see the eBay auction on the WSOP cards.