The World Series of Poker’s 2003 main event champion Chris Moneymaker has provided one of the comedy highlights of this year’s festival in Las Vegas. 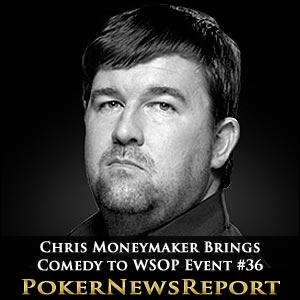 The World Series of Poker’s 2003 main event champion Chris Moneymaker has provided one of the comedy highlights of this year’s festival in Las Vegas.

The Atlanta-born pro was certainly on form with his chat, even if he didn’t make it into Day 2 of the $3,000 buy-in No-Limit Hold’em Shootout event #36 as one of 60 qualifiers.

The 36-year-old – who now lives in Nashville, Tennessee – stated that he had just played really bad during a hand, before then shoving all-in to double-up on the very next hand.

However, feigning dissatisfaction with his experiences at the WSOP, Moneymaker then complained: I run so bad at the WSOP, which prompted fellow one-time bracelet winner Eric Baldwin, of Wisconsin, to reply: You won the main event, shut up. Moneymaker – with a grin spreading across his face – had his own response, of course, clarifying his case with: I meant this year’s WSOP.

Yes, Moneymaker doesn’t really have too much to complain about, considering he pocketed $2.5 million for taking down the main event back in 2003 during the 34th staging of the annual series in Vegas.

However, he won’t be among the 60 players who remain in contention after Day 1 of this current event after later hitting the rail.

Day 1 saw the players spread out over 60 of the Rio’s Brasilia Room tables, with 13 of those featuring nine competitors and the other 47 hosting 10 players each. But, because of this event’s format, 14 players are tied at the top of the chips leaderboard on 90,000 while the smallest stack is the 80,800 held by American Darren Rabinowitz.

Michigan’s David ‘Bakes’ Baker was back at the felt for this tournament after winning the $10,000 H.O.R.S.E. event #32 the day before for $451,779, so ensuring that he has definitely cashed for two days in succession.

New Yorker Jean-Robert Bellande also won his table late in Day 1, but not before announcing that he had decided to “open up my calling range” – which then saw the pro lose the very next hand when he moved all-in pre-flop with K♦ 6♦, only to lose out his heads-up opponent’s J♦ {9d] on a J♣ 10♠ 9♣ 9♥ 3♣ board.

Bellande had succeeded in doubling-up his rival’s short stack, but had won the table just two hands later when all the chips hit the table after the flop of A♦ 7♦ J♥. Bellande found himself behind this time with his J♦ 4♦ against his opponent’s A♥ Q♠, only for the turn to supply him with the 3♦ turn for a diamond flush and the knockout.

A happy – and somewhat slightly bemused – Bellande said: That’s how I win, I guess…get it in bad and come out on top.

Meanwhile, British stars Liv Boeree and James Akenhead met for a heads-up clash at their table, playing two-handed for the majority of two levels before the latter moved on to Day 2 when his A♣ Q♦ beat Boeree’s A♦ J♣ on a board that read 7♦ 8♦ 2♦ 6♠ 5♠.

Day 2 in the Blue Section of the Rio’s Amazon Room will feature 10 six-handed tables, with all playing down to a winner to create the 10-handed final table.