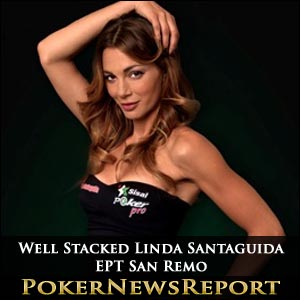 The professional Canadian poker player, who has already enjoyed a profitable tour of Europe this autumn, was responsible for bursting the bubble with the elimination of Christian Troger, and made impressive gains late in the day to amass 350,000 more chips that his nearest opponent – Australian Daniel Neilson – who he leads by the equivalent of more than 30 big blinds.

Strong Field Bunched Up Behind

There are many other players still in contention who have enjoyed a hot roll this autumn. Elio Fox, who took down the WSOPE Main Event last week, sits in tenth position slightly ahead of Mike “Timex” McDonald who took down the most recent Epic Poker League Main Event. Kevin MacPhee had a sensational World Championship of Online Poker and is now transferring his run to the live poker games, while a number of players have achieved the Triple Crown of cashing at the EPT London, WSOPE and now the EPT San Remo – among them, UK poker player Barny Boatman.

Four female poker players remain in the field. Italians Carla Solinas and Linda Santaguida are both well stacked (!) and enjoyed a steady day, but Vanessa Selbst lost a commanding position after hitting quad nines to eliminate Domenico Cordi and temporarily take the chip lead to finish with mid-table respectability on 400,000 chips. Swedish player Frida Broberg´s fortunes went in the other direction.

Broberg Doubles Up Against Neilson

After having her chip stack crushed by Irishman Michael Graydon – who flopped a pair of Kings against Frida´s pocket Sevens – Frida rebuilt her stack carefully throughout the day and took a valuable pot against Daniel Neilson just before the close. Moving all-in for her last 152,000 chips with A♣ 6♠, Frida was called by Neilson, who was holding Q♥ Q♠. The flop of 10♣ 9♥ J♠ favoured Neilson more than Frida, but she was given flush options with the arrival of the 4♣ on the turn – flush options she did not need, as the A♠ spiked on the river to enable her to double up.

The intention on Day 4 of the EPT San Remo is to play down to the final three tables of eight, and when play resumes later today, the 64 remaining players are guaranteed a minimum cash of €12,000 – but all will be aiming for the major prize of €800,000. Blinds will be 4,000/8,000 (ante 1,000) and the average chip stack is 390,000. Italy has 23 representatives among the remaining players, but there are also two former EPT Champions among the field (MacPhee and McDonald) and 8 online poker qualifiers in search of a little bit of glory.

Chip Counts at the End of Day 3