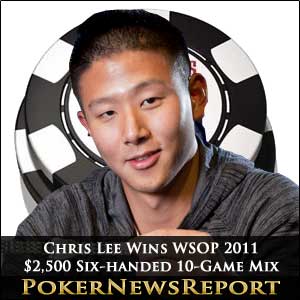 The 24-year-old – who attended the private research university in Durham, North Carolina – emerged victorious from a final table that last two days because of the WSOP’s hard stop rule.

We were given almost four hours of action with seven players on Saturday before Ohio’s Kevin Chance exited to settle on an official final table of six.

However, Lee, who eventually defeated Pennsylvania’s Brian Haveson in heads-up play to collect his first gold bracelet and $254,955, did confess afterwards that he “was really starting to doubt” himself after struggling to make the transition from online poker player to “a live tournament player”.

Clarksville’s Lee stated that this victory “means a lot” to him, especially as he had been “playing live tournaments on and off for the last three years” without gathering “a ton of success” – unlike his “decent amount of success on the Internet”.

But, incredibly, following his success, Lee admitted that he is “not actually a mixed game player” as he normally only plays pot-limit Omaha no-limit hold’em.

While adding that “a lot of these games are new” to him, Lee also confessed that he didn’t “go in with high expectations” of WSOP glory, but believes he played well during all four days of the tournament.

Back to the final table, then, and it didn’t take too long for the short stack to exit. John D’Agostino placed the remainder of his chip stack on to the felt against Lee during pot-limit Omaha.

New Jersey’s D’Agostino showed As-Qs-10d-7h to find himself trailing to the Kc-Kh-10s-5h of Lee. An Ad-Qd-7c flop gave D’Agostino top two pair, while the 10h on the turn changed nothing. However, a Jc on the river handed Lee a Broadway to sent D’Agostino out in sixth for $32,200.

Americans Shaun Deeb ($67,146) and Kendall Fukumoto ($45,839) exited in fourth and fifth respectively to leave us with Travis Pearson, Lee and Haveson.

Lee called to show Ad-Qh against Pearson’s pocket 10s. The flop showed the As while the turn and river missed to give Pearson $101,258 for his third place.

Lee began heads-up play against Haveson with about 70% of the chips. They played almost 60 minutes with Haveson doubling up twice to close the gap – before Lee won the contest during triple draw 2-7.