American Chris Klodnicki has won the Epic Poker League (EPL) $20,000 buy-in mix-max main event at the Palms Resort and Casino in Las Vegas for an incredible $801,680 and an EPL Championship ring. 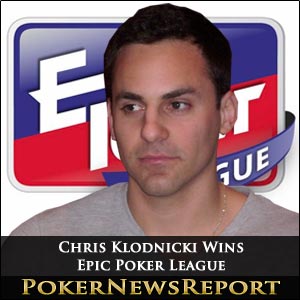 American Chris Klodnicki has won the Epic Poker League (EPL) $20,000 buy-in mix-max main event at the Palms Resort and Casino in Las Vegas for an incredible $801,680 and an EPL Championship ring.

The New Jersey native had to see off fellow States star Andrew Lichtenberger in their best-of-three heads-up battle of Day 5 of an event that saw the 100-player line-up generate a prize pool of $2,360,000.

With Joe Tehan eliminated in third place for a $306,800 pay day, Lichtenberger and Klodnicki faced a tough heads-up clash, before the latter emerged victorious with a 2-0 success after almost 15 hours’ play on the final day.

New York State’s Lichtenberger took some time to consider his options before taking it to 750,000. Klodnicki made the call and the flop showed 8♣ 7♦ 3♦. Klodnicki bet 500,000, while Lichtenberger decided to go all-in.

Again, Klodnicki called to reveal A♦ 4♦, only to find himself behind to Lichtenberger’s A♣ K♥, although the former did have a flush draw.

The 4♣ turn gave Klodnicki a pair, while the 2♣ on the river changed nothing, so giving Klodnicki the pot and the title, while runner-up Lichtenberger took home $514,480.

However, Lichtenberger still called to reveal J♣ 9♣, while Klodnicki tabled the K♦ K♠. The 3♦ turn changed nothing, while the 9♠ gave Lichtenberger a pair of nines. But Klodnicki had two pair and that was the end of the first match.

Klodnicki showed 9♦ 9♥ to be ahead and stayed in front following a flop of K♣ 5♥ 4♠. The 7♠ turn paired Tehan, but he was still behind Klodnicki’s nines. Then came the 3♣ on the river to send Tehan out in third.

Fourth place went to Hollywood’s Michael Mizrachi, who left with $174,640 after being eliminated by Tehan on hand 110.

Under the gun, Lichtenberger raised to 16,000 and small blind Mizrachi moved all-in for his last 134,000 chips. Tehan asked for a count, but then made the call anyway, while Lichtenberger folded.

The Q♠ turn gave Mizrachi some outs, but the 10♣ on the river seals his fate and he was hitting the rail in fourth place.

It took just 19 hands for the final day’s first elimination – and that dubious honour went to Wisconsin’s Scott Clements.

In the small blind, Clements moved all-in, with big blind Lichtenberger making the call to reveal K♦ 10♠. Clements showed his hole cards of K♣ 9♣ to be well behind, although he did have a flush hope.

Day 4 had seen the likes of New York’s Amnon Filippi exit in 12th place, Hafiz Khan, of California, leave in 11th, Wisconsin’s Amit Makhija go out in 10th and Vegas-based Canadian Sorel Mizzi hit the rail in ninth – all for $50,920.

Team PokerStars Pro David Williams exited in eighth, while Jason Mercier left in seventh and Noah Schwartz was knocked out in sixth, with each of the three Florida pros leaving the event with $89,680.

Vegas-based Sam Stein crashed out in 20th, while Florida’s Justin ‘Boosted J’ Smith hit the rail in 19th, to soon be followed by California’s Marco Johnson in 18th, Randal Flowers, of North Carolina, in 17th, Nevada’s Eric Baldwin in 16th and John ‘Brock’ Parker, of Maryland, in 15th.

The next leg of the series arrives on January 27 and runs until the 30th, with a $1,500 buy-in Texas Hold’em nine-handed main event.