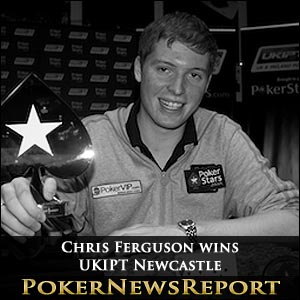 The winner of the PokerStars-sponsored UKIPT Newcastle Main Event was still a toddler when his nefarious namesake was chalking up his first entries on the Hendon Mob database, and while “Jesus” remains in exile, young Christopher Ferguson is making the headlines following an incredible run-good/run-bad/run-good climax to an intriguing tournament.

Ferguson´s first “run-good” had started on the penultimate day of the Main Event, when he took two massive pots from Timothy Chung to become the first player over 1 million chips, crushed his table when play was sixteen-handed to run his stack over two million, and would have been clear chip leader had it not been for the late, late run of Jack Sambrook on Sunday.

Going into the final day´s play, the respective chip stacks looked like this:-

Ferguson Starts his Run Bad in the First Hand

In the first hand of the day, Ferguson lost the first of his chips – folding to a pre-flop shove from Anthony Shields after raising to 48,000 from the button.  Following Dan Hemingway´s (A♦ Q♦) elimination at the hands of Sam Holden (A♣ K♣), Ferguson was again to pass chips across the table to Anthony Shields – this time 445,000 chips as Shields´ A♦ 9♣ came from behind to beat Ferguson´s A♣ K♣. Another 440,000 chips went to chip leader Jack Sambrook after Ferguson was forced out of a pot on the river and within an hour, Ferguson had dropped down to 1,150,000 chips.

Despite his significant chip advantage, Jack Sambrook was unable to capitalise on the game and, after doubling up Ewan Brown in a K♠ 6♠ < K♣ J♣ race, Alex Jobling (J♥ J♦) cracked Sambrook´s pocket Aces to take the chip lead and reduce Sambrook to 311,000 chips. Sambrook was to be eliminated in seventh place when his 10♦ 7♥ were no match for Ewan Brown´s A♦ 3♥, with Anthony Shields following soon after – his 3♥ 3♦ failing to hold against Alex Jobling´s A♥ J♣.

Holden in the Ascendency – and Descendency

Sam Holden – the WSOP November Niner from 2011 – made a brief appearance at the top of the chips counts after rivering top straight to take a stack of Ewan Brown´s stack and then out-kicking Alex Jobling (K♥ 10♥) with A♥ 10♠ after both players had paired on the ten-high board. Sadly he also failed to hang on to his chips for very long due to doubling up both David Knight (2♥ 2♦ < Q♦ 9♦ – Knight´s Queen paired on the flop) and Chris Ferguson (A♣ Q♦ < J♣ 10♣ – Ferguson rivered a straight). Soon after Alex Jobling had eliminated Ewan Brown in fifth place (A♦ K♦ > A♠ J♣), Ferguson was fortunate to double up again when Jobling missed every out with his A♦ J♠ and Ferguson´s 6♠ 6♣ held.

The small stacks of Ferguson and Knight continued to eat into the larger stacks of Jobling and Holden – Ferguson hitting a turned flush to crack Jobling´s trip Kings and Knight hitting Quad Queens against Holden before Knight inflicted his own damage on Ferguson´s stack  in a K♣ K♦ > Q♣ Q♦ race. As Level 28 started (40K/80K ante 4K), the respective chip stacks looked like this:-

David Knight was the first player to be eliminated when play went four-handed – risking his tournament life with A♦ 10♠ and being called by Alex Jobling´s A♠ K♠ – the King pairing on the river. Sam Holden, who was well overdue for some good luck, doubled up Chris Ferguson when he called Ferguson´s 8♠ 6♦ shove with A♠ 4♥ – the 8♠ pairing on the turn – and was then eliminated when shoving his A♥ 5♥ into Ferguson´s A♦ Q♦ – the board running 2♣ 4♣ 7♣ / 5♦ (pairing Holden´s five) / Q♠ (pairing Ferguson´s Queen).

Into the Heads-Up, Alex Jobling held a 2:1 advantage in chips over Chris Ferguson – an advantage which was quickly extended when Jobling forced Ferguson to snap-fold a pot containing a third of his chips. Ferguson got his chips back with interest when coming from way behind with 9♠ 5♠ (38%) to master Jobling´s A♥ K♣ and, as he drew to within 1 million chips of Jobling, the two players agreed a deal which would see the first two prizes almost equally divided, leaving £10,000 and the UKIPT trophy to play for.

Ferguson Hits the Cards When He Needs Them

Chris Ferguson´s ridiculous “run-good” spell continued immediately after the deal was made. Almost levelling the chip counts when his K♥ 4♠ hit a King on the flop and a Four on the river, Ferguson took control of the game when his 7♥ 4♥ caught a flush on the flop, and then he “finished the Job” and captured the UKIPT title when his 8♠ 8♥ held against Jobling´s A♥ Q♥.

623 players entered the UKIPT Newcastle Main Event through either [geolink href=”https://www.pokernewsreport.com/pokerstars”]online qualifiers at PokerStars[/geolink] or by paying the £770.00 buy-in. The prize pool amounted to £436,100 and paid the top 72 players. Due to the deal being agreed, Chris Ferguson picked up £87,640 instead of the £105,900 that was originally available for the winner but, as he tightly clutched his winner´s trophy last night, he did not look too sad about it!