Chris “Jesus” Ferguson, who has publically been quiet since the Black Friday fraud and money laundering charges levied against Full Tilt Poker, let his lawyers do the talking with a flurry of court filings that lay claim to the funds of poker players that were seized by the U.S. government. 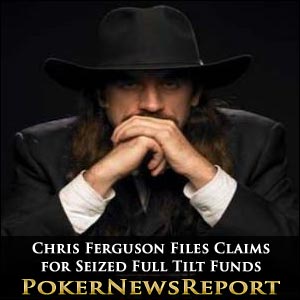 Chris “Jesus” Ferguson, who has publically been quiet since the Black Friday fraud and money laundering charges levied against Full Tilt Poker, let his lawyers do the talking with a flurry of court filings that lay claim to the funds of poker players that were seized by the U.S. government.

In responding to the Department of Justice (DoJ) complaint against him and fellow Full Tilt board members, Ferguson filed numerous motions. In one of the motions, the poker pro lays claim to more than $98 million in government seized funds on behalf of Vantage and Kolyma, which were companies operated by Full Tilt. Ferguson’s legal brief says that the cited accounts “contain funds deposited by Full Tilt Poker players to be transferred to Vantage and/or Kolyma or funds deposited by Vantage and/or Kolyma that were in the process of being returned to Full Tilt Poker players.”

In another motion, Ferguson, through Tiltware, the parent company of Full Tilt, also lays claim to various bank accounts adding up to $196,553,080 in funds. Other accounts were also identified in Europe as well as two accounts that consisted of player funds at SunFirst Bank in Utah, which was recently shut down by Utah regulators for processing payments for [geolink href=”https://www.pokernewsreport.com/online-poker-rooms”]online poker sites[/geolink] in violation of the Unlawful Internet Gambling Enforcement Act (UIGEA).

In light of the ongoing sale negotiations of Full Tilt Poker to Group Bernard Tapie (GBT), including discussions with the DoJ aimed at facilitating reimbursements to Full Tilt players with unpaid account balances on the once-proud poker site, an attorney for GBT said the recent court filings by Ferguson were not an issue in Full Tilt’s acquisition by GBT.

“We had no involvement in the filing of the claims, but we were aware that they were being filed,” said GBT lawyer Behnam Dayanim. “The claims present no concern to us, and likewise present no concern with respect to our ongoing negotiations with the DoJ.”

In yet another motion filed by Ferguson with the United States District Court for the Southern District of New York, the 2000 World Series of Poker Main Event champion moved the court to allow his Los Angeles-based attorney, Ian J. Imrich, to practice pro hac vice before the court in New York, although his law license restricts him to practice only in the state in which he has passed the bar exam and has been admitted.

Pro hac vice is a latin legal term that “usually refers to an out-of-state lawyer who has been granted special permission to participate in a particular case, even though the lawyer is not licensed to practice in the state where the case is being tried”. The pro hac vice motion was granted by Judge Leonard B. Sand.

Ferguson, Ray Bitar, Howard Lederer and Rafe Furst all have signed waivers of service in relation to the “global Ponzi scheme” allegations that Preet Bharara of the U.S. Attorney’s office has levied against them. The waivers simply mean that the Full Tilt board members need not appear in person to answer the allegations lodged against them and that their attorneys may appear on their behalf.