A truly epic finale to the EPL´s Main Event provided organisers with the dream start they wanted, and cemented Rheem´s impressive record in live poker events. 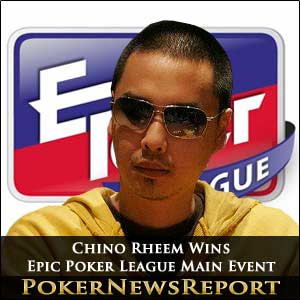 A truly epic finale to the EPL´s first ever Main Event provided organisers with the dream start they wanted for the series, and also cemented  Chino Rheem´s impressive record in live poker events this year.

Rheem, who had three deep runs in the WSOP in June, collected the $1 million first prize at the expense of Eric Seidel ($604,330) and four other leading poker players on a final table that had a combined total of 16 World Series of Poker bracelets, 3 World Poker Tour titles, and over $40,000,000 in career tournament earnings.

Seed Plants Himself at the Table

The early action was very tentative, with only one hand going to showdown within the first hour. Huck Seed was the beneficiary in that hand, and he collected several more pots with post-flop aggression, Hasan Habib being the big loser when Seed shoved in hand 44 – the first major action of the day! Huck Seed continued to rob blinds and steal pots – more than doubling his overnight stack to 893,000 – but in Hand 79, he eventually ran into a wall in the shape of Jason Mercier.

Meanwhile, Eric Seidel had made massive gains on his overnight stack when doubling up through Chino Rheem and taking the ever increasingly valuable blinds whenever Jason Mercier stood aside. Overnight leader, Habib, and Rheem were engaged in their own battle – splitting a massive pot when both held pocket pairs on a board of J♠ 3♣ 3♦ J♦ 3♥ – and Rheem eventually busting Habib ($237,650) when his pocket Aces held on against Habib´s pair of Jacks. Despite his win, Rheem was now the short stack, with 1,661,000 chips opposed to Mercier´s 2,205,000 and Seidel´s 2,999,000.

At the beginning of the Heads-Up, chip counts between the two players were fairly level – Chino Rheem (3,635,000) held a slight advantage over Eric Seidel (3,110,000) and the chips he had just acquired from Jason Mercier. However, Rheem was the more aggressive of the two throughout the early stages and quickly built a million chip advantage over Seidel – an advantage he increased when catching a straight on the turn in a ½ million chip pot to take Seidel below 2 million chips.

Rheem continued to chip away at Seidel – shoving against Seidel´s raises – and after 40 hands of heads-up play it was all over. Eric Seidel raised again and Chino Rheem shoved, as he had been. This time Seidel announced he was all-in and turned over A♣ Q♥. Rheem turned over A♠ K♦ and watched as the flop of A♦ 8♠ 4♦ was followed by 3♦ on the turn and 10♦ on the river, to give him a diamond flush, the title of Epic Poker league Main Event Champion and $1 million.