Chino Rheem defeated Erick Lindgren heads-up to win the WPT World Championship after one of the most predictable and boring WPT final tables ever. 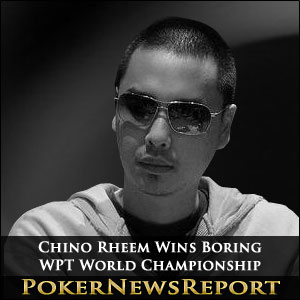 Chino Rheem defeated Erick Lindgren heads-up to win the WPT World Championship after one of the most predictable and boring WPT final tables ever.

The decision not to live stream the final table of the WPT World Championships was a blessing to everyone. After the engrossing final table of the EPT Monte Carlo Main Event and the dramatic victory of David Sands in the WPT Super High Roller yesterday, the six players contesting the final table seemed content to gain victory by boring their opponents to death.

Possibly the day off distracted the players but, when the last six men ‘standing’ took their seats at the Bellagio, it seemed that each of them was focused on protecting their stacks rather than building on them. Incredibly it took sixty-seven hands before massive chip leader Chino Rheem called an incoming shove against his chip stack – and deservedly he lost.

A Slow Start Gets Slower

The final day of the WPT World Championships started quietly (Level 22 blinds 20,000/40,000 – antes 5,000), as the defensive attitude of the players enabled Brandon Steven to take down four consecutive pots with min-raises to chip up to 1.8 million chips.

Only short stack David Peters made any effort to inject any life into the event – but paid the ultimate price for poor bet sizing when allowing Erick Lindgren to take a pot off him with a rivered Six-high straight and then letting Jonathan Roy (J♦ 9♦) see the flop of J♠ 6♠ 2♠ cheaply when he was dealt 10♦ 10♠. Roy´s flopped pair held and Peters was out in sixth.

Peters´ exit seemed to act as a warning to the other players not to do anything with their chips, and it was another two hours until Brandon Steven was eliminated in fifth when shoving his 10♦ 10♥ into the A♥ 4♥ of Jonathon Roy. Roy flopped the A♦ to take the hand, but other than his rise up to 3,945,000 chips, the other three chip stacks were virtually identical to when play had begun.

A short burst of action saw Chino Rheem win 2.5 million chip pots against both Lindgren and Roy, and then we saw the first double up of the day (after 4 hours of play) when Matt Hyman (A♠ 9♣) paired his 9♣ on the flop and went on the river a flush against Rheem (4♣ 4♥). Thereafter the players went back to sleep and only one flop was dealt in the next hour – Lindgren collecting 350,000 chips after shoving into Rheem and Rheem (once again) protecting his chips and folding.

When the next hand of note happened, it saw the demise of Matt Hyman, who was unfortunate to be dealt K♣ K♥ at the same time that Jonathan Roy found A♦ A♠ in front of him. Matt Hyman´s two-outer never arrived and he was bust in fourth – Roy temporarily moving to within ten Big Blinds of Chino Rheem.

Being demoted to short-stack sparked a temporary inkling of life into Erick Lindgren, who doubled up K♣ K♦ > A♦ 8♦ against Jonathan Roy and then took a 3 million chip pot against Chino Rheem when Lindgren´s A♦ paired on the Turn. Jonathan Roy managed a double up against Chino Rheem (K♣ K♦ > A♣ 3♣) to bring all three players within 12 Big Blinds of each other during Level 26 (blinds 50,000/100,000 – ante 10,000) but practically every other hand was min-raise/fold/collect blinds.

Rheem Lucky to Get Past Roy

The flop of K♦ 10♣ 8♦ prompted Roy to push another 670,000 chips into the pot and – after dwelling again – Rheem made the call. The same sequence of events happened after the Q♥ on the Turn (only the bet was 1,310,000 chips) but, after the 3♦ on the River, Roy shoved the last of his chips into the middle with his set of Eights and was snap-called by Rheem would had rivered the nuts flush.

Had Roy won that hand, he would have had 70% of the chips in play and likely to have won the WPT Player of the Year competition as well. As it was, he was eliminated in third and Chino Rheem took an 11 million -v- 3.5 million chip advantage into the Heads-Up against Erick Lindgren.

Victory Goes to the Most Boring Player

If the previous eight hours had been painful to watch, the heads-up was dire. Both players wanted to avoid losing more than they wanted to win and, on the few occasions that Lindgren took the initiative, Rheem would just fold.

Towards the end of Level 29 (blinds 100K/200K – ante 25K) Lindgren again allowed Rheem cheaply into the flop and then moved all-in after Rheem had put a million into the pot post-flop chasing a gutshot straight. Typically Rheem folded, but it had allowed Lindgren to get within 10 Big Blinds of the chip leader. Unfortunately, when Lindgren allowed Rheem cheaply into the next flop, Lindgren folded after Rheem´s 1 million chip post-flop check-raise, and it was back to square one (again).

The community cards of A♣ 4♣ 4♥ / 3♥ / 8♠ improved neither player´s hand and Chino Rheem became the WPT World Champion for the second time with a rather low-key King-high – which just about summed up the climax of the event perfectly.

The final table of the WPT Poker Championship might have been poker for the purist, but it was no advertisement for live poker. At the end of the (very tedious) day, the players finished in the same order as they started in, and it would have been much better for everyone if organisers of the WPT World Championships had just paid everybody out on Wednesday afternoon.