With only eight players remaining in the WPT World Championships, Chino Reem bagged up almost a third of the chips in play at the close of Day 4. 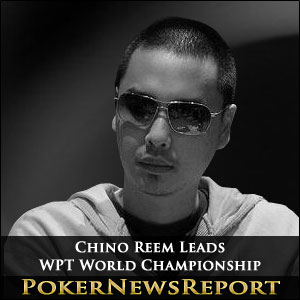 With only eight players remaining in the WPT World Championships, Chino Reem bagged up almost a third of the chips in play at the close of Day 4.

Twenty four players took their seats at the final three tables of the WPT World Championships at the Bellagio yesterday and, with only fifteen of them due to cash, the early action was expected to be slow. However, Chino Reem took advantage of the situation to put his pedal to the metal, enjoy a little good fortune and turn a below average 27 Big Blind stack (270,000 chips at the start of play) into a chip leading 161 Big Blind stack (4,839,000 chips) when the chips were counted at the end of play. Reem´s lead over his closest competitor, Erick Lindgren, is 74 Big Blinds – more than the three shortest stacks have between them!

Reem Starts as he Means to Go On

Chino Reem was responsible for the first bust-out of the day – flopping the 5♠ to enable his A♠ 5♦ to beat Andrew Lichtenberger´s A♣ Q♣ – and then out-kicked Andrew McKenzie A♥ J♥ > A♦ 9♠ for a big double up. He carried on taking the chances in the big hands and got paid off when he bust Jake Cody 9♦ 9♠ > J♦ 10♦ and got three streets of value from Rocco Palumbo with pocket Aces to take the chip lead just as the bubble was about to burst.

Once the players were in the money, there was no stopping Chino Reem. He bust Jeffrey Ishbia in fifteenth place (A♠ K♣ > A♦ 5♦) when rivering a spade flush, cracked Emil Olsson´s A♣ A♠ with a flopped set of Queens to send Olsson to the rail in thirteenth, won a ½ million chip pot against Brandon Steven with a rivered Queen-high straight and finished the day by eliminating Amir Babakhani in ninth K♣ K♦ > 7♦ 7♥.

Chip Lead Changes All Day – Or at Least for Three Levels

A few hands later and it was Jonathan Roy who was ahead of the leaderboard (A♣ A♠ > J♦ 10♥ v Andrew McKenzie), but his lead was to last just two hands due to Matt Hyman´s twin brother Zach missing all his outs with A♦ 9♠ against Brandon Steven´s J♥ J♦ and elevating Steven to the top of the chip counts.

Jonathan Roy was again ahead of the field by the time the tournament went to two tables, but Matt Hyman regained the chip lead when flopping trip Sevens against Amir Babakhani – until Chino Reem took over at the top and stayed there.

Plenty Can Still Happen at the Bellagio

There is still plenty that can happen in the WPT World Championship despite Chino Reem´s substantial lead. The fighting spirit of those players that remain in the tournament is typified by Erick Lindgren who – although currently in second place on the leaderboard – was down to his last 9 Big Blinds at the start of Level 18 (blinds 8,000/16,000 – ante 2,000). Rocco Palumbo, who won the WPT Venice Main Event after being crippled on Day 2 is also still alive in the tournament and the ever-durable Jonathan Roy – who won the WPT Montreal Main Event – still has cards to play in him.

At the bottom of the chip counts, Daniel Negreanu remains chirpy after reaching his third consecutive Main Event final table; however he will have to have his best game with him when play resumes at the Bellagio this afternoon (Level 21 – blinds 15,000/30,000 – ante 5,000) as the three players to his right are Matt Hyman, Chino Reem and Jonathan Roy!

Looking Ahead to Day 5 of the WPT World Championship

Day 5 is expected to be a short one as the eight remaining players play down to the ‘televised final table’ of six on Thursday. Chino Reem looks a strong favourite for the $1,150,000 first prize, and you can see how the game progresses into its climax by following PokerNewsReport on Twitter.