Chino Reem maintained his chip advantage at the WPT World Championships yesterday during a short Day 5 which saw just two players eliminated from the event. 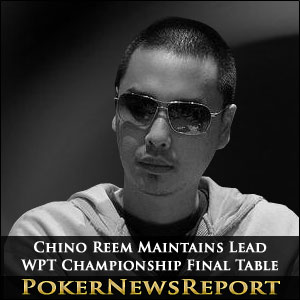 Chino Reem maintained his chip advantage at the WPT World Championships yesterday during a short Day 5 which saw just two players eliminated from the event.

Less than two levels were played of the WPT World Championship final table yesterday due to TV schedules, and it was a case of ‘move along, there´s nothing to see’ as Chino Reem maintained his chip lead and the two players who started the day as short stacks were eliminated to reduce the final table from eight players to just six.

Chino Reem started Day 5 as he had finished Day 6 – by adding chips to his stack – and won the third hand of the day by forcing Matt Hyman out a quarter million chip pot before shoving his substantial chip stack into the centre of the table to force David Peters to lay down his cards after raising the pot by 185,000 chips in the pre-flop action.

Rocco Palumbo Busts Out in Eighth

It took less than two circuits of the button before the WPT World Championships had its first casualty. With blinds of 15,000/30,000 and an ante of 5,000 chips (Level 21), Rocco Palumbo moved all-in from the Small Blind for his last 510,000 chips with J♠ 8♥. Brandon Steven in the Big Blind made the call with K♥ J♥ and the cards were on their back.

The flop of 10♠ 9♠ 5♠ offered Rocco Palumbo the possibility of an open-ended straight or a Flush, but the 9♣ on the Turn and 5♣ on the river gave the hand to Brandon Steven and marked the end of Palumbo´s participation in the event.

Daniel Negreanu always hands around longer than you want him to and, after winning four pots in a row during Level 21 and then doubling up against Matt Hyman (A♦ Q♠ > A♣ K♦ – Negreanu flopped a Queen and his pair held) it was conceivable that he might rise further to become a force in the WPT World Championship Main Event.

However, Negreanu´s luck was to desert him during Level 22 when he shoved all-in on the flop of 10♥ 8♠ 5♥ with A♠ 10♣ for top pair and was called by Erick Lindgren who had J♣ J♥ for an overpair. The 8♥ on the Turn and 7♦ on the River sealed Negreanu´s fate and settled the final six players who will feature on the ‘TV Final Table’ when play resumes at the Bellagio this afternoon.

Leaderboard Order as you Were

The order of players in the WPT World Championship is as you were at the end of Day 4, with Chino Reem, Erick Lindgren and David Peters increasing the size of their chip stacks during Day 5, while Jonathan Roy, Matt Hyman and Brandon Steven each suffered slight dents. Today will see the event played down to a winner, who will collect the WPT World Championship Trophy and $1,125,000 first prize.