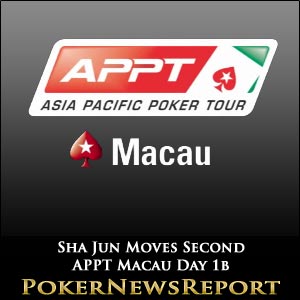 China’s Sha Jun ended Day 1b of the PokerStars.net Asia Pacific Poker Tour (APPT) Macau main event as chip leader on 169,400, although that was only good enough to place him second overall behind Day 1a leader Shih Chieh Su, of Chinese Taipei.

A second Team PokerStars pro Jose ‘Nacho’ Barbero, from Argentina, is down in 31st place on 108,300, while Macau PokerStars qualifier Erdenebold Begzjav, of Mongolia, is ninth on 142,100.

The main event possesses a $6million guaranteed prize pool for this season five tournament, with the top 70 places paid at least $5,991. However, the first place finisher will leave with $483,916.

While eight-time World Series of Poker (WSOP) bracelet winner Phil Ivey signed up for the main event after a seven-month absence from poker, fellow American Tom ‘durrrr’ Dwan chose to take part in a high stakes game in Macau.

Englishman Sam Trickett and Canadian philanthropist, entrepreneur, space tourist and chief executive officer of Cirque du Soleil Guy LaLiberte are thought to have joined New Jersey’s Dwan as Ivey tries to take down the PokerStars APPT event, although he may struggle after finishing Day 1a with just 51,200 chips.

Nottingham’s Trickett took to microblogging website Twitter to write that he is “off to Macau to get involved in Juicy cash games” – and maybe that is the $5,000/$10,000 Pot-Limit Omaha table that us currently running.

Back in the ATTP event, there was a certain amount of controversy during level 7 of Day 1b today, when Team PokerStars Pro Max Lykov suggested that a player had mucked their cards.

The trouble began when a player in early position raised to 2,100. Russian Lykov three-bet to take it to 5,600, ahead of the big blind moving all-in for 3,875. The original raiser then made the call.

The short-stacked player shouted “flush” when showing 2♣ 2♠ – and that’s when it all became a little confusing.

The player in early position moved to muck his hand, completely forgetting that a small side pot was still available.

This was quickly pointed out to him, and he recovered his cards from mere inches away to show A♠ 9♠.

A heated debate ensued and the floor was eventually called. Lykov made his case, but his opponent’s cards were ruled to be live and the pot was awarded to him as Lykov could not beat ace-high.

The Russian didn’t last much long after that blow. Facing the same opponent again, Lykov, in the big blind, strangely called a raise when holding 5♥ 6♥.

The 7♠ arrived on the turn and Lykov opened with another 8,800 bet, with his opponent once again making the call.

The dealer placed the 3♥ on the river and Lykov – taking a few moments to pause – placed the remaining 20,000 or so of his chips into the pot.

His opponent immediately made the call to reveal 4♦ 4♥ for a full house following the revealing of the river card.

Lykov was out and in no mood to wish his opponent any luck as he stormed off in a fury.

An interesting stat or two has also emerged from the Macau event. Yes, it’s an Asian poker tournament, but Australia has the biggest number of entries in 67, followed closely by China on 66.

Meanwhile, PokerStars has witnessed some hot high stakes action over the past few days, with Ilari ‘Ilari FIN’ Sahamies winning just short of one million dollars over the past week to take the Finn to the top of this year’s leaderboard on $2.2 million.

There has also been lots of play in the $200/$400 Pot-Limit Omaha games that has resulted in the mysterious ‘Fake Love888’ – who is thought to be another Finn in Patrik Antonius – picking up nearly half-a-million dollars.

But, with some players enjoying big cash boosts, there has to be losers, as well – and ‘GARFIELD25’ and Rui ‘PepperoniF’ Cao have dropped about $700,000 between them, although it is the former who has taken the biggest hit in losing more than half-a-million.