Stephen Chidwick heads into the penultimate day of the Eureka Prague Main Event with a comfortable chip advantage over Mark Dalimore and forty-one other players. 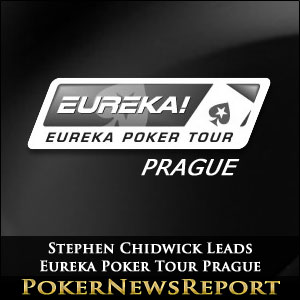 Of the 396 players that returned to the Hilton Hotel in Prague yesterday to contest Day 2 of the PokerStars Eureka Main Event, just forty-three will carry a chip stack through to the penultimate day of the tournament – lead by UK poker player Stephen “Stevie444” Chidwick.

Chidwick almost failed to enter the Eureka Prague Main Event after being held up in the travel chaos that affected many players flying out of the UK at the weekend, but he managed to scrape into Day 1B of the tournament as an alternative entry, and yesterday built his stack up to 1,479,000 chips.

Behind Chidwick on the leaderboard is compatriot Mark Dalimore (1,379,000 chips), who acquired most of his chips when busting pocket Kings with pocket Queens in the last level of the night. Four hearts on the board gave Dalimore a Flush, and he shot into second place in the overnight chip counts.

The feature of Day 2 was the money bubble bursting. The prizes for the Eureka Prague Main Event were announced overnight, and the talking point when the 396 players were taking their seats was that 191 of them would be paid.

The speed of eliminations during the first few levels of play meant that the bubble burst during Level 15 (blinds 2,000/4,000 – ante 500), when Jaxi Kiernan moved all-in for his last 105,000 chips with pocket Kings and ran straight into the pocket Aces of Thomas Layher.

Kiernan had an agonising wait to see if he would be the “bubble boy” as two other all-in hands were being played at the same time. Unfortunately for Kiernan, Ludovic Geilich´s J♦ J♥ held against Dennis Wilke´s K♦ 3♦ and Aleksandr Gofman´s A♦ 8♦ rivered a Flush against Simon Lindberg to keep his tournament life alive. Kiernan was bust in 192nd place, and the remaining players were all assured of a €1,750 payday.

Big Names Survive to Give Chase

Once the bubble had burst, there was a stream of eliminations. More than forty players had failed in their attempts to double up prior to the dinner break (end of Level 16) and, two levels later, only seventy-two players remained in the Eureka Prague Main Event.

Two PokerStars Team Pro players managed to survive through the post-bubble mayhem, and Matthias De Meulder (986,000 chips) and Marcin Horecki (853,000 chips) will be carrying the sponsor´s colours through to Day 3 of the tournament.

Other “big name” players who will carry healthy stacks into the penultimate day of the Eureka Prague Main Event include Kevin MacPhee (769,000 chips) and Chris Moorman (317,000 chips) – both of whom held the chip lead at one stage during Day 2.

Looking Ahead to Day 3 of the Eureka Prague Main Event

When play resumes at the Prague Hilton this afternoon, the forty-three remaining players will be entering Level 21 (blinds 8,000/16,000 – ante 2,000). Play is scheduled to continue until a nine-handed final table is set, which on yesterday´s evidence could result in a short day.

All of the remaining forty-three players are guaranteed a minimum cash of €3,850, but with an incredible €226,400 up top for the winner of the Eureka Prague Main Event, play on Day 3 is likely to be a little more subdued that was witnessed on Day 2.

The ten players who are most likely to be involved at the business end of the tournament include:

Footnote: Day 1A of the Prague Grand Live tournament had to be cancelled as so many players were still involved in the Eureka Main Event. Organisers of the Grand Live tournament (formerly the GSOP Prague) have said that they will attempt to fit everybody into the event in one opening flight but, as Day 1B was already sold out, they could be more than a little bust when play gets underway at 12.00 noon at the Card Casino.