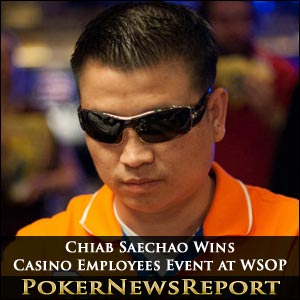 It took 21 hours in total for the Day 1 chip leader in the $500 buy-in No-Limit Hold’em Casino Employees tournament to secure the first gold bracelet of the 2012 series after outlasting 731 opponents, with the most crucial knockout being that of Trish Baker, who left with $43,754 as runner-up.

A total of 81 players made the money, including WSOP executive director Ty Stewart, who left with $2,223 in 19th place – a distinct improvement on his display last year when failing to cash – although he had started the day in 10th.

The Day 1 field was chopped down to just 46 survivors, with Visalia’s Saechao staying relatively quiet for much of Day 2 as he started the nine-handed final table eighth in chips.

Even then, Saechao appeared happy to let other players clash, before – when down to five players – he secured successive coin flips, including one against Florida’s Baker, to make his move.

That pivotal hand saw Baker open under the gun for 32,000. Small blind Saechao instantly pushed his stack in for approximately 260,000 more, with big blind Ray Pulford folding and Baker tanking before sliding her stack into the middle.

Incredibly, the 10♥ arrived on the turn to give him trips, while the Q♣ came on the river to hand Baker trips but also improve Saechao’s hand to a full house as he doubled-up.

Thereafter, Saechao notched three of the final four knockouts as he took the title – the most important of which, of course, was sending Baker to the rail as runner-up.

That final hand saw small blind Baker complete and Saechao check to see a flop of 10♦ 2♦ 7♥. Saechao bet 35,000 and Little Torch Key’s Baker check-called ahead of the 6♠ turn, although Baker had already announced an in-the-dark check. Saechao checked, too, and the river was the 6♦.

Baker immediately moved all-in for 200,000 and Saechao called, although he was not willing to turn over his hole cards just yet. Baker said: Straight as she showed 9♣ 8♣, with Saechao triumphantly slamming down J♦ 4♦ for a flush before letting out an excited and celebratory woooo! after realising he had just won the event.

The official nine-handed final table was set when New York State’s John Vohs hit the rail in 10th place for $4,189.

Vohs checked again, while Pulford fired in another 50,000. Vohs tanked for a short while, but moved all-in for approximately 130,000 in total, only for Pulford to swiftly quickly call.

Pulford showed Q♦ Q♣ for the over-pair, while Vohs tabled 9♦ 10♠ for top pair. The 3♠ river was no help to Vohs and his tournament was over.

Georgi Ivanov Out in Ninth

Nevada’s Georgi Ivanov was the first elimination from the final table, picking up $5,309 in ninth place after being initially crippled by Saechao.

Baker and Ivanov limped in, while play folded around to Saechao, who moved all-in for 86,000. Big blind Pulford folded and Baker got out of the way, as well. But Ivanov snap-called to show K♠ J♣, while a surprised Saechao was happy to see he was well ahead with his K♣ Q♥.

Ivanov’s short stack was all-in two hands later, when blinds Baker and Washington State’s James Routos called. The 6♦ 2♠ 4♦ flop saw Baker fire out 50,000 and Routos fold. Ivanov’s 7♥ 7♣ had held so far against the K♠ 10♦ of Baker and stayed there when the 5♦ came on the turn, although she now had slush draw outs.

However, Baker didn’t need any diamonds as the 10♠ arrived on the river to give her top pair and the knockout.

Baker, in the cut-off seat, limped in, with action folding around to big blind Wilmot, who checked to see an A♥ 10♣ 9♥ flop. Wilmot checked again, while Baker bet 50,000. Wilmot gave this some thought before check-raising all-in.

Baker called fairly quickly to show 10♦ 9♦ for two pair, while Wilmot’s A♣ 7♥ meant he had top pair – leaving the latter needing help to stay alive. The 5♣ turn elicited a shout from Wilmot, who knew another five would beat Baker’s two pair. However, the 6♦ came on the river and Wilmot was out as Baker moved on to 510,000 as the new chip leader.

Sixth place and $11,571 went to Denver’s Pinkussohn when his luck ran out over the space of a few hands – still during level 18.

Pinkussohn, who had somehow survived a short while earlier when his ace-jack cracked Baker’s aces, was crippled in a hand with Routos before being eliminated by Baker soon after.

Routos, on the button, raised from and big blind Pinkussohn shoved all-in. Routos called quickly to see that his 5♠ 5♦ dominated the 4♠ 4♥ of Pinkussohn. The Colorado player’s hopes of securing another suck-out pretty well ended when the flop came A♦ 8♠ 5♥ to provide Routos with trip fives.

Only runner-runner fours or straight cards could help Pinkussohn now – and that didn’t happen, with the turn Kh and river 10♣.

Now short-stacked, Pinkussohn shoved for approximately 50,000 a few hands later after Baker, from under the gun, had limped in. The action folded around to Baker, who called to show A♥ 9♣, while Pinkussohn revealed A♦ 6♥ to again be dominated.

The 10♣ 2♥ 8♠ flop was no help to Pinkussohn, although the 10♦ turn paired the board to give him some outs to a chop. But the 5♦ river was again no help and Pinkussohn was heading to the rail as Baker increased her chip lead.

Saechao – who had just doubled-up through Pulford on the previous hand – scored a knockout when sending Georgia’s Nicolas Vaca-Rondon to the rail in fifth place for $15,359.

Under the gun, Saechao limped in as action folded to Vaca-Rondon, who shoved all-in for about 200,000. Saechao couldn’t call quickly enough as he shouted: “Aces!”

Sure enough, Saechao showed A♦ A♣ to dominate the 7♠ 7♥ placed on the felt by Vaca-Rondon. The K♠ 5♠ 6♦ flop changed nothing, while the J♥ turn was also no good to Vaca-Rondon. The 2♠ river confirmed Vaca-Rondon’s exit while also increasing Saechao’s chip lead on 850,000.

Pulford, who had been the chip leader for long periods of the final table, was next to go in fourth place for $20,663 – and in the process highlighted how cruel poker can be when losing successive hands to Baker.

The first of these devastating hands saw Pulford, on the button, limp in, small blind Baker make the call, and big blind Routos check. Baker then checked in the dark before the flop 10♠ 8♠ 6♠ came. Routos also checked, but Pulford bet 40,000.

Baker was the sole caller to see the 2♠ turn, and he shoved all-in for 144,000, prompting Pulford to muck his hand while saying: I flopped the nut straight!

If that wasn’t bad enough, check out this hand. Under the gun, Baker limped in and the action folded to Pulford, who checked. The flop came 10♦ 8♣ 5♣, Pulford checked and Baker fired out an 80,000 bet. Pulford called ahead of the Q♦ turn and then checked again, only for Baker to move all-in.

Pulford snap-called to show 5♥ 5♦ for trips to trap Baker, who Q♠ 8♠ or two pair. Baker needed an eight or queen to win the pot and send Pulford to the rail – and, don’t you know it, the Q♥ arrived on the river to give her a full house!

James Routos Knocked Out in Third

Now three-handed, Saechao held about half the chips as the dominant leader – and he took even greater control not long after when sending Routos to the rail in third place for $28,206.

Then came the heads-up clash between Saechao and Baker that was ultimately won by the former.

The three-day event #3 kicks off later today, which is a $3,000 buy-in Heads Up No-Limit Hold’em/Pot-Limit Omaha tournament. The field is restricted to 512 entries.