Cheong and Cazals Back For Extra Day in WSOP Event #6

Event #6 was meant to finish on Day 4 last night – but the final heads-up tie of the $5,000 buy-in No-Limit Hold’em Mixed-Max will take place today. 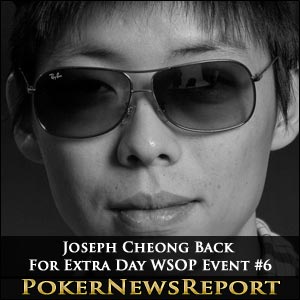 Event #6 was meant to play to a finish on Day 4 last night – but the final heads-up tie of the $5,000 buy-in No-Limit Hold’em Mixed-Max will now take place today.

A total of 409 players started the World Series of Poker (WSOP) tournament in Las Vegas – creating a prize pool of $1,922,300 – with yesterday seeing the semi-finals played out in two very different manners in the Rio All-Suite Hotel & Casino.

California’s Joseph Cheong beat Frenchman Hugo Lemaire in a one-sided match-up. In fact, inside 15 minutes, Cheong had cracked the pocket aces of Lemaire with threes to enjoy a substantial chip lead in semi-final 2. He stayed in control for the majority of the tie to eventually eliminate Lemaire in fourth place for $162,443 after just under three hours’ play.

Lemaire checked and Cheong bet 89,000, only for the former to check-raise all-in. Cheong snap-called with 6♦ 2♦ for a flopped flush, leaving Lemaire drawing dead with his J♥ J♠. The 3♦ river completed the board, with Cheong progressing to the final.

However, semi-final 1 took almost nine-and-a-half hours before Montserrat’s Aubin Cazals eliminated Australian Warwick Mirzikinian – resulting in Cazals and Cheong agreeing to a midday start today after the former had been eliminated from Day 1b of the $1,500 buy-in No-Limit Hold’em Re-entry event #9.

Mirzikinian, of New South Wales, controlled much of the semi and even had Cazals all-in twice, only for the latter to fight back for the victory. The last hand saw Cazals, on the button, raise to 70,000 and big blind Mirzikinian three-bet to 200,000. Cazals then four-bet all-in and Mirzikinian called for about 650,000 more.

Cazals showed A♣ K♥ to be a huge pre-flop favourite against the K♦ 10♥ of Mirzikinian. Cazals stayed in front following a 9♥ 5♦ 3♥ flop, while the 4♦ turn changed nothing – meaning Mirzikinian had only three outs to stay alive. However, the 7♥ river was no good and Mirzikinian exited in third place for $162,443.

Warwick Mirzikinian Gets Bye on Day 3

Day 3 saw 31 starters – number one seed Mirzikinian getting a bye – with another marathon match taking place in the quarter-finals, when team PartyPoker Pro Marvin Rettenmaier’s elimination in fifth place for $68,151 after five hours at the hands of Mirzikinian set the semi-final line-up.

Seventh seed Cheong – who finished third in the 2010 main event for $4,130,049 – made the semis by beating Nabih Zaczac, Brock Parker and Monaco’s Fabrizio Baldassari to set up his clash with 14th seed Lemaire. The Frenchman overcame the likes of Robert Tepper, Aaron Jones and Randy Haddox to make a last-four spot his own.