Chaz Chattha, the “nearly man” of the Grosvenor UK Poker Tour, cracked one of the highest class fields ever for the GUKPT to take down the Main Event in Luton. 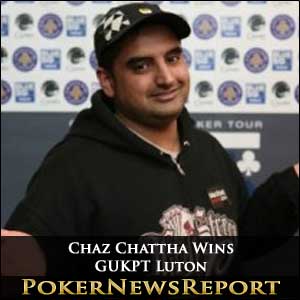 Chaz Chattha, the “nearly man” of the Grosvenor UK Poker Tour, cracked one of the highest class fields ever assembled for the GUKPT to take down the Main Event in Luton.

Chaz, who established himself as one of the UK´s leading poker players when winning the Bellagio Cup in 2006, had cashed in five previous GUKPT Main Events – including 3 final table appearances – prior to overcoming EPT winner, Toby Lewis, in a tense Heads-Up finale to the event.

Chaz started the Day 3 of the Main Event as the shortest stacked of the ten remaining players on a table which featured (in addition to Toby Lewis) top online poker player Andrew Feldman (well he was until you-know-who closed their doors), previous GUKPT winners Dan Furnival (who had already won the £500.00 HLHE side event this week) and Ergun Macit (his fourth GUKPT final table in two years), and young (injured!) QPR starlet Antonio German. More than just making up the numbers were Bertie Keegan, George Hassabis, Austrian qualifier Michael Huber and Jonathan Weekes.

Chip Counts at Start of Play

Through the early hands of the final, blinds were nicked, a few 3-bets were folded and only Jonathon Weekes made any significant gain – his pocket aces overcoming Dan Furnival´s pocket tens to double up. However, as the blinds crept up to 6,000/12,000, George Hassibis shoved all in when hitting a straight on the turn, to be crushed by Bertie Keegan who had already made a full house of tens over queens on the flop. Keegan took the lead after that hand and Hassibis soon lost his remaining chips with K♣ 9♣ against Toby Lewis´ 10♣ 10♦.

Almost an hour had passed before Hassibis´departure, and it was another hour before the next elimination – Ergin Macit taking Andrew Feldman with A♣ 4♣ against Feldman´s A♦ 5♥. The 5♠ on the flop and 5♦ on the river ended Macit´s hopes of glory and he was joined on the rail within 30 minutes by Jonathon Weekes, whose J♠ J♦ got rivered by Andrew Feldman´s A♠ 10♠ – Feldman taking over the chip lead.

Chaz Chattha had made several attempts to get involved and improve his stack, but all of his shoves and re-raises had gone unchallenged. Finally he got in against Bertie Keegan with A♠ A♦ against Keegan´s K♣ Q♥ and then Chaz (A♠ Q♥) got a call from Michael Huber (A♦ 10♦). It looked for a while as if Chaz had shoved at the wrong moment when the flop showed A♣ 10♥ 7♦ to give Huber two pairs. Amazingly, the Q♣ was dealt on the turn to give Chaz a reprieve and send the Austrian qualifier to the rail. Practically the next hand, Dan Furnival couldn´t find any friends on the board for his A♦ J♣ and bust out to Toby Lewis´ 7♥ 7♣.

With just five players left in the tournament, and a difference of £48,000 in prize money between first and fifth, nobody was prepared to match Chattha´s aggression in pre-flop raises and all-in shoves, and he slowly inched his way towards the top of the chip count. Bertie Keegan dropped to short-stack despite taking out Antonio German with K♥ K♦ v Q♣ 10♥ and was the next player to depart, running his A♠ 2♣ into Chaz´s A♥ K♠.

Chaz grabbed the chip lead from Toby Lewis, but was soon to relinquish it to Andrew Feldman, as the online pro gave a masterclass in 3-handed play. In an incredible turnaround, Feldman came from holding 300,000 chips to 1.3 million in the space of 45 minutes. However, the man who had started the day with just ten big blinds – Chattha – was not to be beaten. Regaining the chip lead from Feldman after some aggressive raising of his own, Feldman shoved all-in with Q♦ Q♥ and was snap-called, and eliminated, by Chaz´s K♣ K♦.

Into the Heads Up

After adding Feldman´s chips to his own, Chaz now had a commanding advantage over Toby Lewis. Knowing that he would have to double up soon to stop his chips being eroded by Chaz´s aggression, Toby shoved his A-10 into Chaz´s A-K and it was all over when the K♥ was the first card out. Chaz had achieved what few people had done before – start the final table of a GUKPT Main Event in last place and emerge the victor. Well Played Sir!