Charlie Combes leads a stacked field of international poker stars towards the money after an exciting second day of the Master Classics of Poker in Amsterdam. 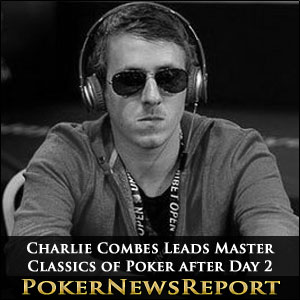 Charlie Combes leads a stacked field of international poker stars towards the money after an exciting second day of the Master Classics of Poker in Amsterdam.

After a quick re-count of re-entries, 179 players returned to the Holland Casino in Amsterdam to compete in Day 2 of the Master Classics of Poker (MCOP) Main Event, knowing that it was no longer possible to fire another bullet.

Nonetheless, the lack of further re-entries did not inhibit players from putting their tournament lives on the line in the first level of the day, with both Denzel van der Ven and Fatima Moreira de Melo both being fortunate to double up within the first few hands.

November Niner Michiel Brummelhuis also raced off to an impressive start – rivering trip Nines to take a stack of chips from Vorn Walthaus – but it was not such good news for the winner of MCOP Event #1 Florens Feenstra and EPT London Super High Roller Champion Martin Finger, who both bust out of the MCOP Main Event before the first break.

Other big names to fall during the early stages of Day 2 included Shannon Shorr and Ilari Sahamies, while overnight Day 1 chip leader Noah Boeken improved on his stack and Rob Hollinck – the first Dutch poker player to win a WSOP bracelet in 2005 – moved up the leader at the expense of compatriot Marcel “The Flying Dutchman” Luske.

Big Names Step Up a Gear

As the blinds rose to 800/1,600 (ante 200) the field was reduced in size to 120 players as the big names stepped up a gear. Michiel Brummelhuis (A♦ J♥) chipped up towards the chip leaders when flopping a Jack to eliminate Vladimir Stepanian, before Noah Boeken cemented his advantage at the top of the leaderboard by busting Hanz de Vries A♠ A♥ > K♥ K♠

Johan Verhagen continued his good run after dinner to bust Fatima Moreira de Melo from the MCOP Main Event A♦ Q♣ > 6♠ 6♣, while last year´s winner Ole Schemion ominously moved up the leaderboard with the dual KO of Thomas Brader and David Boyaciyan. Tom “Hitthehole” Middleton (A♦ K♣) hit the A♥ on the river to cripple Clyde Terlaan, before the Terlaan made a remarkable recovery which included two double-ups against Middleton – one of which saw the Dutchman flop Quad Fives.

The biggest hand of the evening session saw Charlie Combes grab the chip lead with the elimination of Steve O´Dwyer. O´Dwyer had enjoyed a sensational day – chipping up from an opening stack of 29,800 chips to a well-above average stack of 254,000 chips – however, all of those chips went in on the board of 7♦ 10♥ 9♣ / 10♦ / 6♦ when O´Dwyer called Combes´ post-river shove. Charlie Combes rolled over 10♠ 6♠ for a runner-runner Full House, and Steve O´Dwyer was eliminated from the MCOP Main Event.

With that pot, Charlie Combes moved into a narrow chip lead ahead of Dmitry Nemirovsky and Noah Boeken in the overnight leaderboard, but both Combes and Boeken have been drawn on the same table for when play resumes in the Master Classics of Poker Main Event at the Holland Casino in Amsterdam.

Day 3 will also be interesting as only 36 of the remaining 45 players in the tournament are scheduled to cash in the tournament, and Thursday´s TV table features four players who are very short stacked – Eduard Bhaggoe (85,300 chips), Raoul Refos (63,300 chips), Bryn Kenney (59,000 chips) and Jason Duval (50,000 chips).