Thanks to the Little One for One Drop, even the most casual player can contribute to a worthy cause. 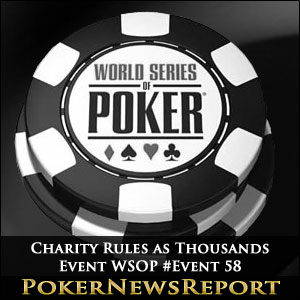 Thanks to the Little One for One Drop, even the most casual player can contribute to a worthy cause.

Good vibes were present throughout the Rio as a massive field banded together in the name of charity. Event #58, the Little One for One Drop, proved unique in several ways. For one, $111 out of every entry will be donated to the One Drop Foundation. The charitable organization founded by Cirque du Soleil mogul Guy Laliberte works to ensure that nature’s most bountiful resource, clean water, is provided to everyone in the world. The Little One marks the second charitable event at this year’s WSOP; the first one being the recently concluded $111,111 High Rollers event won by Anthony Gregg. The inaugural One Drop tournament took place in 2012 and featured an otherworldly $1 million buy-in.

Secondly, Event #58 is the only tournament this year to feature unlimited buy-ins throughout the first four levels. What this means is that no matter how many times a player busts, they can spend an additional buy-in to get back in. Naturally, this led to some of the most aggressive play we’ve seen thus far at the WSOP. Take accomplished pro Greg Mueller for instance. Mueller busted on three different occasions, all within a half-hour of one another. Finally, on his fourth bullet, the resilient pro was able to double through, and now sits on over 13,000 chips. This type of ultra-aggressive play was prevalent throughout the rebuy period.

The Little One clearly favors top pros and others with a hefty bankroll. Whereas the average player can probably only afford one bullet, pros will have multiple chances to accumulate chips.

And they’ll need it. The Little One for One Drop drew more entries than almost any other tournament this year. On Day 1a alone, 2,233 players showed up. That’s over 2,000 entries before rebuys were even calculated. However, the tournament’s aggressive pace and fast structure led to swarms of early knockouts, and only 428 players, or about one-fifth of the field, survived the day.

Day 1b was no different as thousands of hopefuls poured into the Rio. All told, the prize pool for the event topped off at $4,280,400. First place will receive a staggering $663.7 while second will net over $408k. Not a bad payday for a $1k entry event.

It is assumed that the tournament has raised nearly half a million dollars for One Drop. As always, players who cash in the tournament are encouraged to donate an additional 1% of their winning to the foundation.

Alright, so the prize pool won’t be as large as the One for One Drop High Rollers event. But the Little One is a worthy option for regular Joe’s who want the opportunity to contribute to a worthy cause and possibly make some bank in the process. It’s good to give.