British-based Greek Charalampos Lappas leads the final 10 for the $1,500 buy-in Pot-Limit Omaha Hi-Lo Split-8 or Better event #47 of the World Series of Poker. 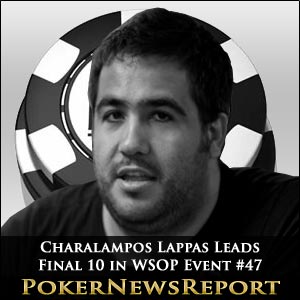 British-based Greek Charalampos Lappas leads the final 10 for the $1,500 buy-in Pot-Limit Omaha Hi-Lo Split-8 or Better event #47 of the World Series of Poker.

The 30-year-old – who lives in south coast of England city Brighton – timed his run to the top of the leaderboard, on 994,000 chips, perfectly by winning the very last hand of Day 2 as the field was cut down from 149 survivors to just 10 in the Pavilion Room of the Rio All-Suite Hotel & Casino.

Lappas and Russian Viatcheslav Ortynskiy had all their chips in the middle on a 6♥ Q♦ 10♦ flop, with the former holding A♠ J♦ 3♦ 10♠ and the latter tabling two aces, a king and an eight. The J♠ turn gave Ortynskiy a Broadway straight, only for the J♣ to arrive on the river to hand Lappas a full house.

Day 2 saw another 10 levels played out, with Loube also zooming up the charts late in the day. One hand saw Denver’s Noomis Jones all-in on a flop of Q♦ A♥ K♦ while holding Q♠ Q♣ 9♠ 8♣ for trip queens. However, Jones was in deep trouble as Loube showed A♠ A♦ 7♠ 5♠ for a set of aces. The 3♥ turn and 4♠ river were no good to Jones, who exited in 14th for $12,094, while Loube became the first player to break the one million-chip barrier.

However, well before the final 10 players were known, Day 2 started with every competitor aiming to make the money and share in the $1,320,300 prize pool, before considering the winner’s cheque of $267,345.

Of course, that meant losing 24 more players as only 117 would be paid – and that was particularly bad news for the extremely unfortunate money bubble boy Neil McFayden.

The London player re-raised all-in for about 16,000 after fellow Brit Steve Jelinek had initially raised. Birmingham’s Jelinek called to show 8♦ 7♣ 5♣ 2♣ while McFayden revealed A♠ A♦ 9♦ 6♥. The board came down 8♠ A♣ 4♦ 6♠, catching McFayden slightly by surprised as the realisation quickly hit home that he was out as his trip aces had lost to Jelinek’s straight.

But this was great news for Vancouver’s Terrence Chan, who managed to hold on long enough with just 800 chips to hit the rail in 117th place for $2,509 – which ties him on nine cashes this series with Russian Konstantin Puchkov and American Joe Tehan as the trio chase the late Nikolay Evdakov’s record of 10 cashes at the 2008 WSOP.

However, start-of-day chip leader Alex Gomes became a surprise casualty just ahead of the dinner break as Lappas made his move towards topping the Day 2 leaderboard.

With Gomes all-in, he held top two pair, tens and sevens, on the flop while Lappas had a pair of aces and the nut low draw. A three arrived on the turn to keep Gomes ahead on the high hand while Lappas still hadn’t made a low. However, a deuce on the river paired the board to hand Lappas the top high hand and send the disappointed Brazilian to the rail in 46th place for $4,872.