The Dutch government has pushed forward some proposals which could change the face of gambling in the country. 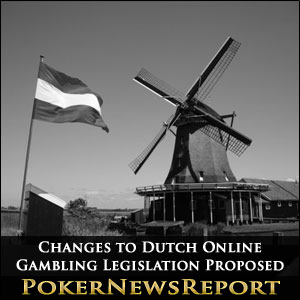 The Dutch government has pushed forward some proposals which could change the face of gambling in the country.

The Dutch government is hoping to introduce sweeping reforms to its online gambling industry as early as the beginning of January next year.

In line with other European countries that are reexamining the issue of gaming, the Dutch Justice Ministry announced this week that the government is determined to modernize its gaming policy. The government therefore plans on introducing a draft gaming bill which will allow for a licensed and regulated online gaming industry in the country.

While land based operators currently pay a 29% tax rate, licensed online operators will pay only 20% tax in a bid to attract them to the new industry.

The licenses would be subject to strict regulations to control levels of crime and fraud and to prevent problem gambling.

The government admitted that thousands of Dutch residents already play poker and casino games at foreign sites and it was best to offer a regulated and licensed industry so that the government could monitor gambling and also generate revenues for the country.

The supervision of the licensing process for foreign operators will be done by the Dutch Gaming Authority who welcomed the draft bill. The Chairman of the board of the authority, Jan Suvyer pointed out that some players operate in an unreliable environment and, once online gambling become regulated in the Netherlands, operators will be subject to stricter requirements.

He said that the authority would supervise in various areas, including consumer protection, the prevention of crime and fraud, and gaming addiction.

As with all new bill proposals in Holland, the new online gambling proposal will undergo a two month consultation period.  It will then make its way through the State Council, before coming before the House and Senate.  All these stops require approval before moving on, showing that the bill has quite a way to go before it is signed into law.

If and when the bill is approved, the licensing process will begin in January 2015.

Justice Minister Fred Teeven and Minister of Finance Frans Weekers issued a statement on the new plans for Holland’s online gambling landscape and invited interested parties to comment via a website link.