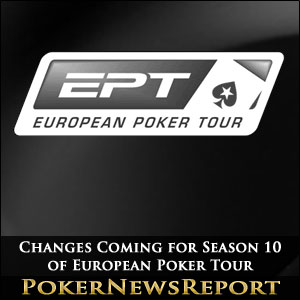 PokerStars Live Game Specialist Neil Johnson made waves by announcing several changes to this year’s EPT format. Of these changes, several are in response to opinions voiced by players who participated in last year’s events.

Season 10 of the EPT is set to kick off in Barcelona in just a couple weeks.

This year, late registration for all high buy-in events, including super high-rollers, will be extended through the beginning of Day 2. More and more, top professionals are skipping the first few levels of a tournament. And while some players feel the early levels are a great time to accumulate chips, others believe that poker without antes isn’t really poker.

In particular, players suggested that registration for the Main Event should be extended. Now, players who choose to enter at the beginning of Day 2 will sit with a relatively healthy chip stack of nearly 40 big blinds. As was the case last year, other open events will allow late registration up until the start of level 5.

High-roller events have been extended from two days to three. Last year, most of these prestigious events had to be extended to a third day anyway. With even bigger fields expected this year, players will play 10 levels on each of the first two days, and down to one on Day 3. This structure will help tournament directors avoid difficult decisions regarding whether to extend a tournament an additional day.

Although no-limit hold’em is more popular than ever among amateurs, today’s top pros would rather play tournament events that host a more varied offering of games. In response to this, Johnson is considering adding draw events to the Italian Poker Tour and possibly a Draw Championship to be held at the EPT Sanremo. Johnson has publicly announced that he’s up for any ideas anyone has to help make these types of tournaments more successful.

But perhaps the most alarming change is the alteration of the payout structure. Whereas most tournaments pay out the top 10-11%, EPT events will see upwards of 15% of the field cashing. Minimum payouts will be set extremely low: 1.7 times the buy-in. It is unconfirmed if and how the payout changes will affect those who make the final table.

A recurring complaint among players was that they were forced to play hand-for-hand at a short handed table. In lieu of this, the bubble structure has been rebalanced.  Now, when on the bubble each of the remaining tables will feature an equal amount of players.

To date only the EPT Barcelona and EPT London schedules have been announced, with the former commencing on August 26 and running through September 7. The EPT London will kick off on October 2.