Chan and Seidel chosen by fans for WSOP rematch

There really could only have ever been one winner in the race to find the rematch poker fans most want to see – the world’s hottest player, Erik Seidel, against Johnny Chan from the 1988 World Series of Poker (WSOP). 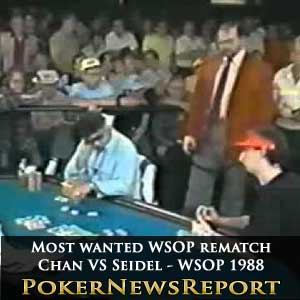 There really could only have ever been one winner in the race to find the rematch poker fans most want to see – the world’s hottest player, Erik Seidel, against Johnny Chan from the 1988 World Series of Poker (WSOP).

This result – announced on Tuesday – surely came as no great surprise to WSOP organisers after they last month set up a poll to gauge the most anticipated main event rematch following their decision to announce two other big replays involving Chan vs Phil Hellmuth from 1989 and Sammy Farha vs Chris Moneymaker from 2003.

The public were given four choices to vote on, with the Seidel-Chan option – which will be played on June 2 during the 42nd running of the WSOP – beating out the David Williams-Greg Raymer encounter from 2004, 2006’s Paul Wasicka-Jamie Gold clash, and Jonathan Duhamel’s 2010 heads-up battle with John Racener.

The 1988 heads-up meeting was so momentous that the last hand of the battle was celebrated in poker movie Rounders – from the same year – as Chinese master Chan beat the young unknown from New York to pick up the $700,000 top prize.

Incredibly, this was Seidel’s first cash – a handy $280,000 – from a major event that featured 167 entrants, while Chan had already picked up the $10,000 no-limit hold’em main event bracelet from the year before.

That last hand has become legendary in poker circles, with Seidel and Chan limping in as the dealer put out a Qs-8d-10h flop.

However, when the 6d came on the river, Seidel swiftly moved all-in with Qc-7h that made top pair, but was well and truly crushed as Chan had flopped the nut straight with his Jc-9c.

Of course, since that momentous occasion, Seidel and Chan have won eight WSOP bracelets – with the 53-year-old Chan now on 10 – while both have picked up over $24 million in live event winnings to become true poker legends.

The vast majority of poker fans will have missed these two poker heroes in action from 23 years ago, although there is some footage available online of the final hand, but that is all about to change as they go head-to-head in the Rio All-Suite Hotel & Casino in Vegas.

June 2 is going to be one busy day for Chinese master Chan, though, as he also takes on ‘Poker Brat’ Hellmuth in a rerun of their 1989 main event clash, which the American won to collect $755,000 after seeing off 177 rivals.

The third match-up will see Moneymaker and Lebanese star Farha reprise their 2003 heads-up clash, which was won by the American for a top prize of $2.5 million after he had outlasted a field of 839.

The Hellmuth-Chan meeting will be a single match-up, while Moneymaker vs Farha will be a best-of-three clash which begins with each participant having the exact same amount of chips as they held during their first meeting eight years back.

That means Moneymaker will have 5,490,000 in chips and Farha will start with 2,900,000, although that will be reversed for the second round. Additionally, if a third match-up is required to separate them, they will then begin with equal stacks.

The full details of Chan vs Seidel are not yet known, but one things is certain – it’s going to be a fantastic day for all poker fans.

All of the three match-ups will be shown on American cable television network ESPN in June.